Wyatte Wylie is a 6-0, 188-pound defenseman who the Flyers took in the fifth round of the 2018 NHL Draft. The Everett, Washington native has made a big jump this past year and as a result, should be rewarded with an entry-level contract. So far that hasn’t happened.

He turns 20 in November and could turn pro, if not he will go back to the Silvertips for what will be his fourth season there. Last year he had 11 goals and 47 points in 67 games and he’s a right-handed shot. In the playoffs, he had five points in 10 games. Going into last season something big changed in his game.

“I took a lot from this camp last year. Just the way you break pucks out and stuff so I took that back to Everett and it obviously helped my offensive game when I could play defense and break it out and spend more time in the offensive zone,” he explained. “Learning how to get pucks out faster you get to spend more time in the offensive zone, and you get to create more. That really helped me, and my coaches gave me more opportunities. It was a great season.”

The big key here is the confidence and having the game plan to go back to junior hockey. The Flyers have done a nice job with player development. This is proof of that. If you play better defensively you get more offensive chances, that’s 21st-century hockey coaching. 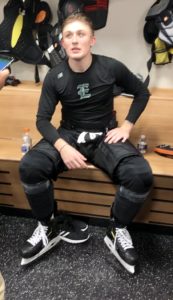 “If they didn’t see me and trust me defensively, they wouldn’t have given me the opportunity,” he revealed. “I had to gain their trust in the defensive zone and obviously they trusted me, so it worked out well.”

Turnovers can kill a defenseman’s playing time. He knows that and remembered how to minimize them.

“They emphasized less stickhandling in the zone and always being ready to make that first pass which helps so you don’t turn pucks over. I really considered that, and I worked on that a lot.”

Thinking the game at top speed is a trait that isn’t talked about enough. A top defenseman has to be able to do that to get any kind of ice time when a player turns pro.

There’s a drill in my gym (Engineered Sports Therapy in Everett) called “eyesight” and it’s a big board and there are buttons that pop up and you touch them as fast as you can and it really helps your vision,” Wylie stated. “You try and keep your head straight and not move it around. It helps a bit and I do that every day after the gym.

What I like about this prospect is his stick and puck control. It’s especially good on the power play. He has an accurate one-time and wrist shot. He has a physical side, will block shots and plays the penalty kill. His speed is good and improving. The rookie game and preseason games will decide if the Flyers are ready to give him an ELC.