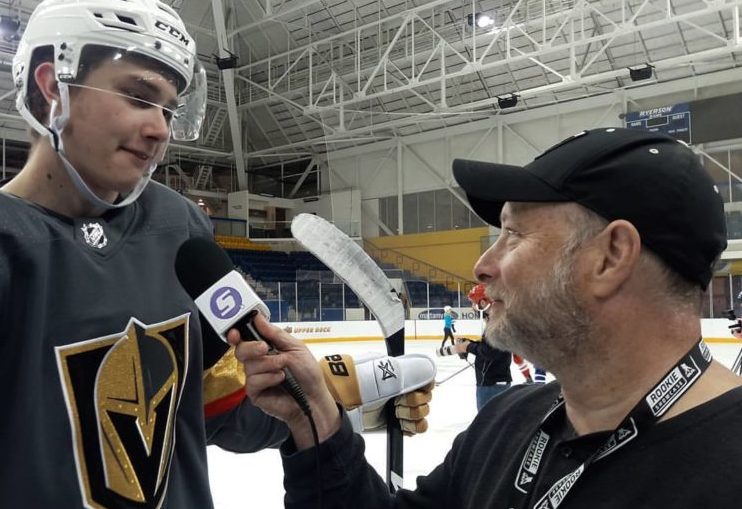 Toronto – – Upper Deck and the NHLPA invited some of the most talented young hockey players on the planet to the old Maple Leaf Gardens to shoot photos for their trading cards and play a game of shinny.

I always talk to as many players as I can. I look to see if they’ve grown or added some extra muscle. These things can help me when I view these players as the season is getting ready to begin.

I think the most underrated player there was Jake Walman. He’s not a big name. He was drafted 82nd overall in 2014. He’s not the biggest or the fastest. At 6-1, 201 he’s a defenseman who’s very close to making the Blues roster. Most likely he starts the year with the Wolves but he did get in seven games there last year getting three points. He wore the “A” at Providence. He’s a two-way guy, with a great shot, and some toughness. Remember his name.

Anders Bjork played great in the East Regionals this year, same as Walman but with one distinction. Bjork looks like he can make the Bruins squad out of camp. He looks to have added some muscles since his season with Notre Dame ended. He’s come a long way. At first I used to look at him as a specialist at the next level. He was solid with the NTDP, but there was a lot of talent there. He had two nice years in college. Last year he was special getting 52 points in 35 games. Jeff Jackson overused him in his last game. He was worn out but he showed a lot of heart. He can be a nice bottom six guy in Boston.

Alex DeBrincat loves the fact that the Chicago Blackhawks drafted him. Having interviewed him a lot over the years I feel the chip on his shoulder is still there. He was drafted 39th overall in 2016 after having back-to-back 51 goal seasons. In his third he scored 65. He was spectacular during his time with Erie. We talked a lot about possibly playing with Patrick Kane. He told me the Hawks have a “plan” for him. I wonder if that plan is teaming him up with Kane this year? If he does he’ll be in the Calder race as well.

Tyson Jost is a beast. He’s not even reached his full potential yet and I’m totally impressed with him.

Brock Boeser was completely “chill”. He had four goals in five games for the Canucks last year and he’s ready to prove himself all over again. He’s a mortal lock to make the squad and he could be a Calder Trophy finalist this season. He’s listed at 6-1, 192, but I think he’s close to 200 now. He’s going to be a fun player to watch.

Klim Kostin is turning pro. That’s nothing new. The sturdy Russian is 100% focused on playing in the NHL with the Blues this year and I won’t bet against him. He’s an impressive guy. On the ice, he will fill the net and off the ice he’s putting in the hard work.

Clayton Keller looks like a professional now. I can’t explain why but when he’s on the ice he can find open players like few I’ve ever seen. I’ll be shocked if he isn’t a Calder Trophy finalist for the Coyotes this season.

Florida will have a hard time sending Owen Tippett back to Mississauga. He had the most impressive and accurate shot of the bunch. He’s already a rock solid 200 pounds with a bomb of a shot. He makes you forget that he’s only 18 at times.

Every interview will air on “Off The Post” in the future.

Me and Cody Glass. Photo by Sportsology