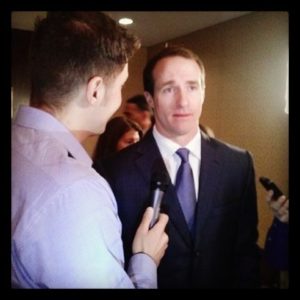 On November 2nd let’s hope we wake up to hear that the New York Jets have traded _____ and a first round pick to the New Orleans Saints for quarterback Drew Brees. Ryan Fitzpatrick aside, if he can manage to keep the Jets around the .500 mark by Week 8 this trade would make a lot of sense. Lets be real, Fitzpatrick is the best QB the Jets have but he’s not leading them to the promised land.

The Jets have blown a lot of first round picks and this could be a pick we’ll spent. Fitzpatrick can go back to being a backup or he could go to New Orleans in the trade. Either way the Jets have to try and do this and they’ll get Brees until 2020 if he approves the trade.

This is a long shot but Brees might be willing to come to New York based on the fact that his current team is 0-3 and clearly don’t look like they’ll be a Super Bowl contender anytime soon. The Jets are a now team. They have a solid receiving core, something Brees could really use to his advantage instead of Fitzpatrick. He isn’t in sync with this group and last week’s performance was the worst since the history of the QB rating.

The Jets can then either keep Geno Smith as the backup or cut him if Fitzpatrick doesn’t go in the deal. The Jets will have to pay part of Brees’ pro-rated signing bonus and everything else he has coming to him but it’ll be worth it. If that player has to be Sheldon Richardson to balance the books then that’s the price of trying to win it all.

Fitzpatrick now has a QB rating of 59.3 with three touchdowns and 7 picks after three games. Even his pass completion percentage has dropped to 55.8%, it’s clear he’s not even the same player as last season so why not?

Does anybody reading this believe that Bryce Petty or Christian Hackenberg will win a Super Bowl with the Jets anytime before 2020? I’d say it’s highly doubtful. Brees is 37 and has 2-3 solid years left. The Jets are at a crossroads, again. They won’t bottom out enough to get the best quarterback in the draft and clearly the defense they’ve assembled isn’t as good as advertised and it’s not scoring points.

The Jets are 1-2 but the schedule suggests they could be in for a bad season. If they get a top flight quarterback, and yes it’s a long shot, then they’d have a fighting chance at a playoff season this year and a deep run into the playoffs next year.

Brett Favre was brought in and it didn’t work out. He got hurt and played with a concealed injury. Brees is a leader and he’s been extremely durable. He can really do wonders for his charity in the “Big Apple” and he could try and save the New York Jets as well.