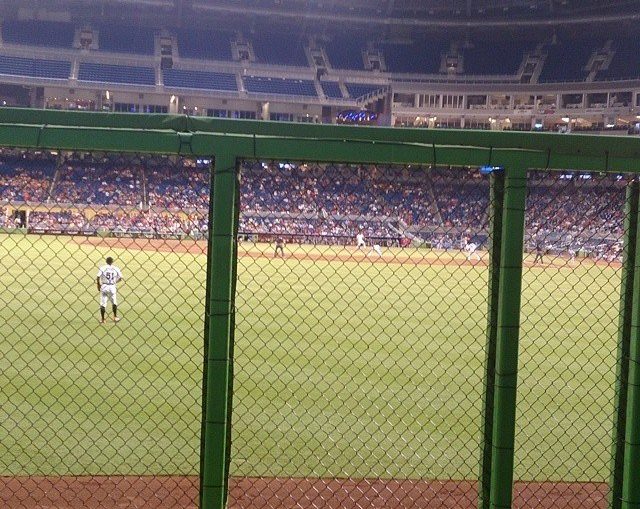 Marlins ace Jose Fernandez was supposed to start last night’s game against the Mets. That didn’t happen since he was dead after a boating accident along with a couple of his friends early Sunday morning.

Life had to go on for the Marlins. It never stops.

So the Marlins moved onward and upward. They played their regularly scheduled game at Marlins Park.  It was what Fernandez would want.

The game happened, and in the beginning, it was more of a mourning.

The Marlins circled around the mound to honor Fernandez one last time before the game started. They grieved. Then, the Mets hugged the Marlins in a show of unity.

Everyone was grieving. Fernandez’s death struck a blow to the baseball community. Not only was he popular with his teammates, but he was beloved by his baseball peers.

He was liked for being a great pitcher and for having an enthusiasm for the game. He lived his life to the fullest until the very last day.

It is hard to accept he is never going to live again. He was only starting his life. He was going to have a daughter soon. He was in the prime years of his career. He won’t witness any of this.

It was like a funeral at Marlins Park when the game started. It was hard for anyone to get into it.

It took Dee Gordon hitting a home run off Bartolo Colon to the upper deck of right field to get the ballpark back to life. He homered in the first inning to give the Marlins a 1-0 lead. It was his first home run of the year and his ninth career home run.

Gordon was clearly emotional when he ran the bases. He was in tears when he was hugged by Marlins manager Don Mattingly and his teammates. Who says there’s no crying in baseball?

It was a WOW! moment indeed. A cathartic moment for the Marlins. It’s why we love sports.

Mets play-by-play announcer Gary Cohen said it best that it was a great moment for baseball. He even said Mets fans should enjoy the moment even if it bothers them.

Divine intervention? Colon grooving a hit-me pitch? It didn’t matter on this night how it happened. It had to happen.

The fans at Marlins Park celebrated. They let it out. It was the loudest noise heard ever in the history of the four-year old ballpark.

The Marlins scored four runs in the second inning and two runs in the third inning. They scored seven runs to get a 7-3 victory over the Mets.

From there, it turned out to be a night of celebration. A night the Marlins can bask in.

For the Mets, this game was irrelevant for them. It was bigger than baseball. It was about being part of the healing process. They certainly played like it.

The Mets could afford to lose this game since the Cardinals took a 15-2 beating from the Reds last night. No harm. No foul. They did not lose any ground in the Wild-Card standings.

This win will not bring Fernandez back. Still, it brought closure. It gave relief. It created a diversion.

That’s what sports should be about, not using it as a vehicle for social issues.

Fernandez would have been proud of the Marlins for going after it last night.

This wasn’t easy for the Marlins to go on. It’s never easy to move on and go to work when someone is dead. Yes, it’s what professionals do, but they are human beings. To play a game the day after a teammate was dead was a hard thing to do. They should be commended for playing through it.

Last night started the healing process for the Marlins and the Mets. It was a game both had to get it over with just so they can finish the season.

After the game was over, the Marlins went back on the mound to throw their caps on the mound in honor of Fernandez. The Mets watched it from their dugout.

The whole game was authentic from emotions to the way it was played.

It felt right the Marlins went on to win this game.

This is what we call a perfect script.