When I think about the Los Angeles Kings, I think about the plethora of centers they have in Quinton Byfield, Alex Turcotte, Gabe Vilardi, Rasmus Kupari, they’re all drafted talent, and they have more. That would be enough for any franchise that’s for sure.

Defensively, I could never list them all, but Drew Doughty, Alec Martinez, and Slava Voynov are big names, they drafted and traded others who have had good NHL careers. Recently they’ve drafted, Tobias Bjornfot, Kale Clague, Mikey Anderson, Helge Grans, and Brock Faber. They never have a shortage of them, and there are some good reasons why. 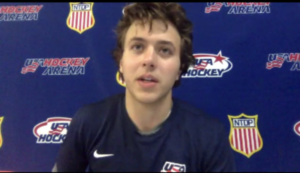 “Our development staff is absolutely the top of the NHL. The way they develop. It’s guys like Mike O’Connell, Glen Murray, Sean O’Donnell,

Jarret Stoll, Craig Johnson, Mike Donnelly, how can these guys not develop? The amount of knowledge in that room and the other thing too is they are really good teachers and have a presence about them. They have a passion and it’s really hard to fake passion.”

Is Yannetti going to give me some insider details?

“I don’t want to get into the process. I think we have an advantage at this stage with what our development staff does. They are phenomenal at teaching certain things and phenomenal with “D”. We drafted a few more “D” and centers so it’s just the way we’re built. With our development curriculum, it’s hard for our guys not to develop.”

They generally don’t rush their prospects. They let them get overripe at times, so they don’t get yo-yo’d between the AHL and NHL.

“I think we’re better than a lot of teams in terms of waiting. But as a whole, I think the NHL is really, really, backward, myself included, all of us, in terms of what we view development timing,” Yannetti said honestly. “You look at baseball. You have Single A, AA, AAA, a development cycle that can be 6-7 years. That’s normal. You can draft a guy in the top five or top 20, even if the top 50. If you’re not in the game in two years, it’s a bust. That’s insane. I think that’s one of the good things our development staff works with these guys for years. They do apprenticeships in the AHL for the most part. There’s not a two-year assembly line. It’s not a one-size-fits-all, and if you don’t make it in two years, they spit you out on the other side. I think that helps us. I do think the whole thing could be better, and we certainly could be even a little more patient sometimes with these guys.”

Drafting a player is only a part of the equation. The player development side is just as important, and the teams that are better at this will get more players to the NHL. The Kings are rebuilding, and they aren’t going to waste that opportunity.