You are here
Home > Baseballology > The Rivalry: Yanks vs Red Sox

Back then, as the story goes, there was a get-together in the woods. A  Red Sox fan, a Cub fan and a Pirate fan were there. They all wondered when their team would make it to the World Series again and decided to call on God for advice.

The Cub fan asked first: “When will my team return to the World Series?”

And God replied: “Not in your lifetime.”

The fan of the Pirates popped the same question.

And God replied: “Not in your children’s lifetime.”

The Red Sox fan, who had listened quietly, finally worked up the nerve to ask: “When will my beloved Red Sox return to the World Series?”

God thought for a moment and then answered: “Not in My lifetime.”

But that answer was incorrect. As all of us know, the guys from Fenway broke the “Curse of the Bambino” in 2004.  For six straight seasons through 2003, the Sox finished second to the hated New York Yankees, a combined total of 58 ½ games behind. So it was a big deal for the BoSox to show up their rivals from the Big Apple. 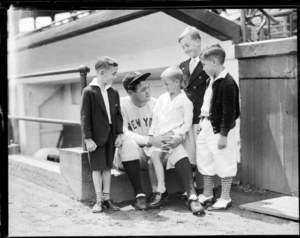 Nowadays, the tables seemed to have turned and favor the Sox in a bitter rivalry that goes back to the first time the teams met on May 7, 1903 at the Huntington Avenue Grounds in Boston.

They weren’t the Yankees and Red Sox then. They had more geographically correct names: the Highlanders who played on the heights of Manhattan; and the Pilgrims – a nod to their New England heritage.

The New York Yankees are the sizzle and the steak, the glamour and the glitz, the most successful franchise in baseball history, perhaps in all sports history.  Through the years, winning has been as much a part of Yankee baseball as their monuments and plaques, as much as the pinstriped uniforms, the iconic intertwined “N” and “Y” on the baseball caps.

The rivalry is the Babe and Bucky and Butch and Boo. It is Carl Yastrzemski trotting out to left field at Fenway Park after failing at the plate against the Yankees, cotton sticking out of his ears to muffle the noise of Sox fans. The rivalry is Mickey Mantle slugging a 440-foot double at Yankee Stadium then tipping his cap to the Red Sox bench.

It is Carlton Fisk’s headaches from the tension he felt coming into Yankee Stadium. The rivalry is Ted Williams spitting, Reggie Jackson jabbering, Luis Tiant hurling for New York and Boston and smoking those fat Cuban cigars.  It is the Yankees’ Mickey Rivers leaping away from an exploding firecracker thrown into the visitors’ dugout at Fenway.

It is the Scooter, the Green Monster, and the Hawk, Yaz and the Commerce Comet, Mombo and King Kong. It is Joe Dee versus the Thumper. It is Roger Maris hitting number 61 off Red Sox pitcher Tracy Stallard, breaking the Babe’s record.

The rivalry has been characterized by some of baseball’s craziest moments. Incidents, anger, rage, occasionally violence, all have been there through all the long decades. Sometimes it has been triggered by personality clashes. At other times the trigger has simply been the “Blood Feud.”

The Yankees of New York versus the Red Sox of Boston is the greatest, grandest, strongest, longest-lasting rivalry in baseball history – a competition of images, teams, cities, styles, ballparks, fans, media, culture, dreams, and bragging rights.

What happened on January 9, 1920, “Harry Frazee’s Crime,” supercharged the rivalry and changed the course of baseball history. At a morning press conference an elated Jake Ruppert announced: “Gentlemen, we have just bought Babe Ruth from Harry Frazee of the Boston Red Sox. I can’t give exact figures, but it was a pretty check – six figures. No players are involved. It was strictly a cash deal.”

Since that “cash deal” all sorts of Red Sox misfortunes followed. Just a few include: losing Game 7 of the World Series in 1946, 1967, 1975, 1986 (the ball dribbling through Bill Buckner’s legs in Game 6); being done in by the Aaron Boone eleventh inning home run on October 17, 2003 that gave the Yankees a stunning 6-5 come-from-behind triumph over the Boston’s just five outs away from winning the American League championship.

And the wind-blown homer that forever made the guy who hit it always remembered in New England as “Bucky F_____g Dent and adding another pennant playoff loss to one suffered through in 1948; Pedro Martinez and Don Zimmer, age 72, going at it and the Yankee coach tumbling end-over-end a few times, and more.

MIKE STANLEY: Regardless of where either team is in the standings, people mark off the Yankee-Red Sox playing dates on their calendars,

It’s the Charles River versus the East River, Boston Common against Central Park, the Green Monster versus the Monuments, Red Sox Rule versus Yankees Suck, WFAN versus WEEI, the New York Daily News matched up against the Boston Herald.

It’s “I LOVE NEW YORK, TOO – IT’S THE YANKEES I HATE” versus  “BOSTON CHOKES. BOSTON SUCKS. BOSTON DOES IT IN STYLE.”

Through the years, winning has been as much a part of Yankee baseball as the monuments and plaques in deep center field, as much as the pinstriped uniforms, the iconic intertwined “N” and “Y” on the baseball caps.

MEL PARNELL: The Red Sox Yankee rivalry was one of the most unique things in baseball history, especially in my time. We were criticized as being a country club ball club being pampered by Mr. Yawkey, our owner. The differences in our ball clubs, Yankees and Red Sox, were that we were probably a step slower than the Yankees. They also had more depth.

LOU PINIELLA: I was always aware of the mix at Fenway Park. There was always a lot of excitement in that small park that made it special. You might have 20,000 Red Sox fans at Fenway and 15,000 Yankee fans. Their rivalry helped our rivalry. It excited the players who had to respond to it.

MICHAEL DUKAKIS: (former governor of Massachusetts and 1988 presidential nominee): The games between the Yankees and Red Sox are always intense. I get a sense that the players feel it too. No matter who they are, or where they come from, how long or little they’ve been with the team, there’s something about those series.

This weekend another series, another match up. Times change. Rosters change. The rivalry continues.