These aren’t ranked. Right now, these are the players I’ve identified with the best chance to win the award. I may change this before the season starts.

Jack Hughes – Whether he plays center or wing, he should get time on the top power play. If he ends up on a line with Taylor Hall, watch out. They train together so there could be some instant chemistry. Don’t ever doubt his creativeness and ability to see plays develop before the opposition. 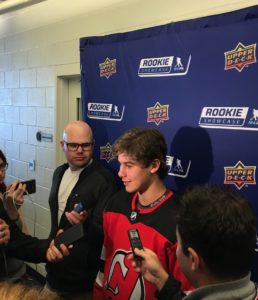 Quinn Hughes – The talented defenseman may be listed at 170 but I just saw him and think he’s more like 175 or a bit more. He has a lot more strength than he did a year ago. His passes now have a lot of power behind them. He was already extremely accurate so now that’s an added dimension. The Canucks prospect should play on the top power play with the shot he possesses. Last season he had three points in five games. This year, he will get a lot more points than that.

Cale Makar – He won the Hobey Baker and he never missed a beat in the playoffs for the Avs. He had six points and a goal in his NHL debut. He is a top power-play guy. His regular-season stats are a clean slate, but this potential elite offensive defenseman could be among the top-scoring defenseman in the league, let alone rookies. 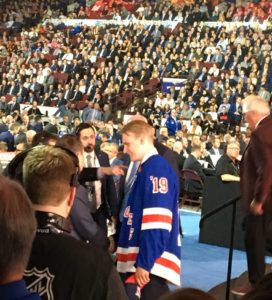 Kaapo Kakko – Will the talented winger play on the top line with the Blueshirts? Second line? That’s going to be interesting to see but he will find a role on this team and he will get some power time. He will make the most of his time on the ice. He’s tough to cover because he’s a scorer and a playmaker. Find him the right partner and that could mean a big season for the Finn

Taro Hirose – The All-American left winger was under Hobey consideration last season while starring at Michigan State. The Red Wings shrewdly signed him as a free agent and he promptly scored seven points in 10 games. He has a great chance to make the team out of camp. He’s 23, slippery fast and he has a great release on his shot while being a very creative passer. After seeing him recently, I’m convinced that he is physically strong enough for a full NHL season and he will get a lot of opportunity with the Red Wings.

Emil Bemstrom – He’s listed as a center. We’ll see what Torts thinks. He’s fast and has a pro shot. The hockey I.Q. is very high, and the Jackets GM is his biggest supporter. Backhand, wrist shot, one-timer, it doesn’t matter. He’s so dangerous around the net. The Blue Jackets prospect was the SHL Rookie of the Year in 18-19 where he had 23 goals in 47 games.

This isn’t the end of the possible players who can win. Just the ones who I think are the most likely at the moment. Once again, this season’s crop will be outstanding.