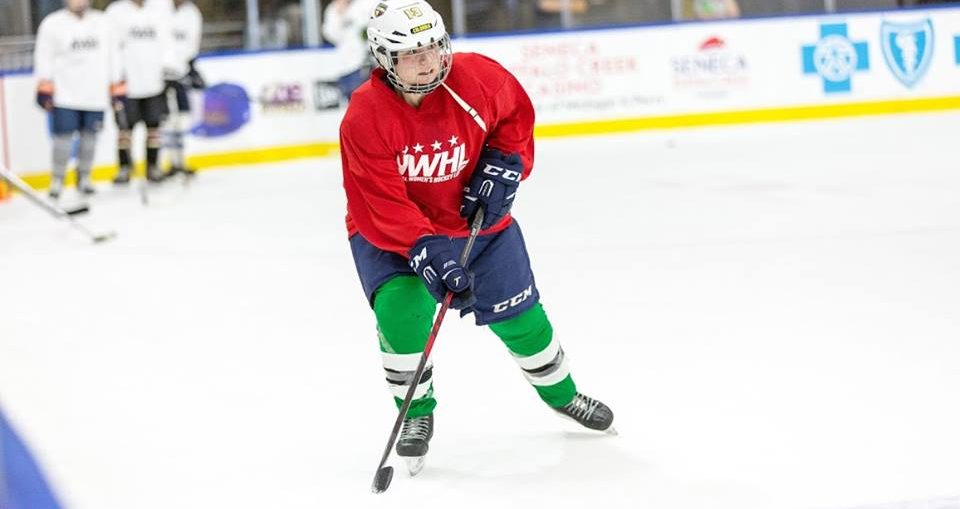 This past weekend the NWHL held their first of three Free Agent Camps at the HarborCenter in Buffalo, New York. After perusing the roster I grabbed a hot chocolate and decided to see if they had any players who could possibly play in the league this season.

The players trying out had collegiate or university backgrounds except for one. Sandra Velasquez stood out on the roster like a sore thumb. Her number was 40, but that’s just a function of the jersey that was probably handed to her. Then it hit me. Under college it read, “15+ years of experience”. So she didn’t play at a college?

“I have no college experience whatsoever. I don’t have any high school experience,” she revealed.“I’m from Colombia. I was born and raised there. My family moved here when I was 8-years-old. I started out playing soccer. I picked up roller hockey when I was 14. I played on the street with the boys in Queens. That’s how I cut my teeth on the sport.

“When I was 19 I moved into ice hockey and fell in love with the sport immediately. I have no formal training, I just jumped right in with clinics and playing in recreation leagues with men.”

What stood out to me was her passion on the ice. Her puck pursuit was strong and she played “balls out” on every shift. She had truculence in her game. There was a peskiness and she scored.

It seemed like her teammates for the day really respected her. She was a non-collegiate player who was living out her dream trying to play the game she loves and get paid for it. But then when you dig deeper you realize that she’s Colombian. Ok, that’s unusual but it didn’t stop there. She’s 38. This was a shock to me because she was only marginally slower than her much younger counterparts. I’m pretty sure there has never been an athlete from Colombia trying to play hockey professionally.

“I play in two rinks in New York City. I play for the NYCGHA Wizards out of Chelsea Piers. And I play with a Men’s team at City Ice called “Brother’s Pizza”,” she chuckled. “It’s very blue collar. They are an awesome bunch of guys. They’re a high level team and they helped me out a lot.”

During her time playing at Chelsea Piers she has run across a few celebrities and one really had an impact on her.

“I’ve brushed shoulders with Mark Messier once,” she said faster that a New York cab driver. “It was awesome. He was a hero of mine growing up.”

She has a day job. She’s a graphic designer/artist. Both of her feet had some interesting ink and I needed to know more about it.

“They’re my own artsy-fartsy interpretation of the Fibonacci Spiral, I designed all of my tats (I have two others on my back that also have a similar design),” she said. “The Golden Ratio means something to me.”

Not having any idea what the “Golden Ratio” meant I looked it up. Here were my results:

That’s out of my league but I did appreciate the art. Just as I appreciated her play on the ice. Regardless of her age I think she’s worthy of a contract. Clearly others are starting to take notice.

“I was invited to play for the Colombian Women’s National team this year for the first time. The program for the women is only two-year’s-old. It was a great honor to represent them in the IIHF Pan-Am games over in Mexico City three weeks ago,” Velasquez stated. “That was an awesome experience. I think that helped me get here. I put that on the application. I was really surprised they picked me to come here. It was an honor to be on the ice with these girls. They are super talented. I’m almost twice their age so I was really happy to keep up with them. I think I learned a lot just being here. This is the highest level of hockey I’ve played in my entire life.”

I think she would serve as a great example to her teammates that she never gave up. I also saw her outthink her opponent. One advantage of getting older is learning tricks and knowing subtitles of the game based on experience. It’s clear that she used that knowledge and she should be rewarded down the road.