With more than a year to game plan against this new wrinkle in the game, NHL coaches have sucked the fun out of 3-on-3 overtime. When it was new we saw some real helter-skelter shifts. We saw some amazing athleticism and super-fast action. A year later the OT period has slowed down to a crawl like the Long Island Expressway or the Schuylkill Expressway, take your pick.

“It’s a chess match,” said Ekblad. “As tiring as it is going back and forth it’s a chess match. When you’re in your own zone it’s kind of easy to play a zone defense. Let them play around the perimeter.”
In a recent game against the Florida Panthers, I noticed how the 20-year-old Phenom was able to cut off a 3-on-2 by staying in the middle, closer to the puck carrier and letting the goalie have an open look with the other player who was about to get the puck. There was no worry, no sudden movements, this has been practiced.

“I just went and attacked the guy,” Ekblad said. “Guys don’t play well under pressure. If Giroux is the guy out there I’m probably not going to attack him. He’s pretty skilled. I saw Simmonds there, he had his head down for a second and I saw the opportunity to jump and pressure him to pass the puck and it worked.”

So it’s gotten much slower, a bit more predictable and that’s what coaches seem to want. Players rarely go hard at it on the first few shifts to end it early. They now take the puck out of the offensive end and set up the offense again to waste time, to slow it down, to sometimes make line changes, and for the fans it’s something that was shiny and new at the beginning that has now gotten a bit stale. Not in every game but many of them.

Last week there was a stat that 26% of games went into overtime. The point of 3-on-3 was to end games earlier and not have most overtime games head into the shootout. 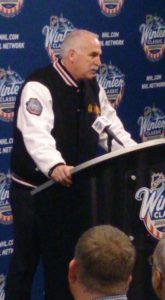 The Kings and Blackhawks are tied for the NHL lead with 5 OT wins. Do they have it figured it out better than most? Joel Quenneville and Darry Sutter have two of the best resumes in the game so I do think they have looked at the risk assessment and have narrowed it down to something they’re comfortable with.

How long will this last? Another season or two and then the Board of Governors will come up with another “gimmick” to prop up the shootout? I think we’re heading down the road where OT may need to go back to the old way and maybe, just maybe, the NHL will devise a new point system.