Alex Meneses is a terrific actress who had a recurring role in the smash-hit series “Everybody Loves Raymond”, and a lot of good parts over the years. Her latest movie is called “The Wall of Mexico”.

“It’s a very cool, little creepy scary very sexy movie about class differences and the have-nots. It’s not like Mexicans at the border like ‘we want in’. It is about a Mexican family who is very well educated, beautiful and decadent and they never age,” Meneses stated. “They have a special well; a fountain of youth and townspeople want that water and we build a wall to keep them out.”

The trailer looks fantastic. It’s slick, and she’s right, there are a lot of beautiful people in this movie starting with her. 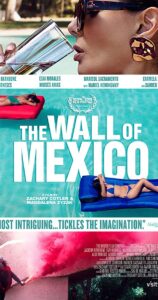 “There are two beautiful girls who play my daughters who are the epitome of what we might think a normal American would be. Entitled, spoiled, hopefully well educated. They sort of symbolize that. Played by Carmela Zumbado and Marisol Sacramento and Esai Morales (How To Get Away With Murder, NCIS: Los Angeles) plays my husband. We are their parents and I run the water business.

“I love Ray and he lives down the street from me. His brother is my daughter’s third grade teacher, so I am in deep with the Romano’s,” said Meneses. “Ray is a wonderful guy, and his wife and doing the show was so enjoyable. The writing was so unbelievable. The people were so talented who did that show and there was a lot of respect. For the funny, there was a lot of respect for the writing and nobody took for granted what they had.

“When I did my episodes, I was recurring for four years. In my first episode, I think I was in season five. At the time the show was already a huge hit. Table read time and work time everyone was as serious as a heart attack. Which was great because it was very precise. Phil Rosenthal (creator, writer and executive producer of Everybody Loves Raymond) is a genius. He would say things like ‘instead of putting your right hand up, put your left up because it’s just funnier’ and it would be.” 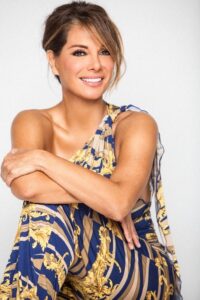 They did some memorable shows in Italy.

“We flew to Italy, everything is paid for and you get to work with Ray Romano and Brad Garrett, Patricia Heaton and Peter Boyle. And I became very good friends with Peter’s wife and his two daughters. And I’m still very good friends with his wife who started a benefit for myeloma cancer,” Meneses revealed. “I’m on the committee for that every year because that’s how we lost Peter. Peter was a cool dude. Just a renaissance man. His wife was a writer at Rolling Stone. They met because she went to go to interview him because he was doing “Young Frankenstein”.

Speaking of Italy. How does their pizza rank with Chicago and New York?

“I’m born and raised on Chicago Pizza and there’s deep dish is southern Italy. It’s like a focaccia. I love it. My parents used to hang out and party at Pizzeria Uno, it’s been around for 80 years, I have a deep connection to that also thin crust, down the street from me, Palermo’s, the family Johnny and his mom used to sit in the corner. They make the best pizza in the world,” Meneses said emphatically. “Italian pizza is fabulous but it’s different. It’s a little wobbly. New York pizza is a bit that way, but you can walk with it and fold it. I love New York pizza. Italian pizza, I shouldn’t say this, not my favorite. Chicago, New York, and Italy, boy, I’m gonna get it.”

THE WALL OF MEXICO, which will be seen nationwide in theaters on Friday, September 18 and will be on VOD starting October 13.