Mike del Tufo was at Baltimore Comic Con and shot some pictures and video of  Kristian Nairn, the man who plays “Hodor” on HBO’s Game of Thrones. 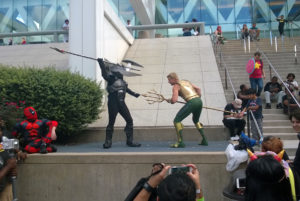 An Aquaman, who’ll be in the new “Justice League” movie made an appearance as well with “Deadpool” watching. Well sort of.