Very few actresses become stars overnight. Many times it can take a decade to become an overnight start. Erin O’Brien, is very versatile and so far, I haven’t been disappointed by her performances. 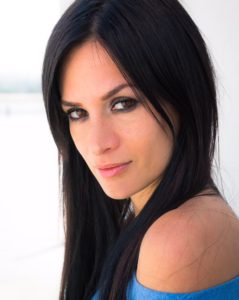 “My first paid movie was in New York, 7 years ago, a horror movie called “Revenants”,” said O’Brien. “The director, Eddie Reyes, is somebody who I’ve worked with him a ton.”“

Revenants” was shot on Long Island. For a “Jersey Girl” that was a good location. Beach life seems to be in her blood.

“I grew up at the New Jersey shore in Middletown. A good place to grow up,” she divulged. The beach always had a lot of traffic even for a short drive.

“She’s currently in a film that’s getting a lot of buzz called “One Penny”. It’s a movie with a good message.

“Whatever situation you’re in there’s a way out.  You can better yourself. It was shot really well. The cinematography looks really beautiful. The story really flows. The acting was really good, “she added. “I play the love interest. I’m the crush of the lead character. A boy whose mother is murdered earlier in the film.

The professor (a character in his 60’s) takes care of him. I work in a soup kitchen. It’s a heart-warming story.

“It has some sweet spots. We’ve won some awards in some festivals. When the younger boy grows up he has a crush on my character. She looks at him like a younger brother (he’s 18 at that point).”

O’Brien hasn’t watched all her movies. But she’s seen “One Penny” and she can’t stop talking about it.

“That was the director’s first feature. It was really good I was super impressed,” she added.

With most movies living in an area for a period of time means you get to enjoy some of the local eateries.

“We shot in D.C., Baltimore Maryland area. We went to the pier a lot. I felt like I ate ice cream most of the time. I also ate at a Vietnamese restaurant that was really good.”

She’s very into fitness but back in her beach days she made some questionable but yummy food choices.

“There’s a lot of things. Waffles with ice cream and cheese fries. I’d eat them religiously,” she stated. “I always had a fast metabolism until the last year in high school. I just wanted to start working out and getting some muscle.”

”Living in Los Angeles she’s gone to a few Rams games.“I’m not huge into sports but I do go to the Rams games. I have no idea what’s going on but it’s fun,” she laughed.

And then she started talking about food again.

“We have a ritual where we meet at a local hot dog place before the game.”

Check out her website:
www.erinobrienactress@weebley.com
She was terrific in this movie as well:
http://www.sportsology.com/fight-valley-is-realistic-and-adrenaline-inducing/