Faven Liuget is married to Los Angeles Chargers defensive tackle Corey Liuget. Corey has been with the team since 2011. He married Faven in July and the two appear in the first episode. What they didn’t talk about was some of the fun items in their wedding registry. I found a few.

“Everybody is like Williams and Sonoma, really? Friends were like, ‘you wanted $1,600 knives and a $2,000 plate?’ We actually got almost everything we wanted,” she stated.

Faven’s family is from Ethiopia. She loves to cook and one of the dishes is something a lot of Americans probably haven’t heard of. 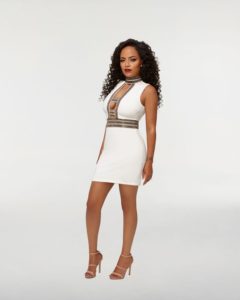 “I’m a good cook. I’m constantly cooking. We just relocated to Irvine, California and the kitchen is really big,” she divulged. “One dish I make is Doro Wot. It’s chicken and egg. It’s one of the most popular dishes usually made on special holidays. If you really know how to do it the preparation takes two days. It’s an amazing dish. My favorite. It reminds me of going back home or when my grandma cooks. Just recently I learned how to make it so I’m super excited to make it for one of the Ethiopian holidays.”

She has a fiery personality that will come through in her first season.

“Yes, I have high anxiety but most of my family already expects it,” she admitted. “That makes me more nervous because I don’t know how to control it at times. I’m so scared that my grandmother is going to watch it.”

Some people are aware of the cameras and some forget they’re there during filming. She was the latter.

“All the time. Every time I would yell, I’d forget the cameras were there and say, ‘shit did I just say that?’ There’s no take backs so after a while I decided this is what it is and I’m just going to really enjoy the journey,” she added.

Sometimes she curses in Amharic.

“Sometimes they’d ask what I was saying. My kids are bi-lingual. I’m constantly talking to my kids in Amharic. I think the viewers will pick up on that,” she laughed.

As her public profile expands, she is impacting a lot of people.

“I’ve done so many interviews for the African and Ethiopian community. It’s crazy because this was before the show even came out,” she said. “A lot of girls see me and ask me a lot of questions. They ask me about what I’m wearing. I will wear necklaces from where I’m from. They’re already cheering me on.”

Here’s her review of the LA Coliseum.

“The stadium has really good food, so that’s refreshing. They also have a nice bar area. They have a cabana. These are all things that are important to me during the game,” she mentioned.

Corey went back and finished his college degree. With all the bad guys that seem to get 90% of the NFL coverage, he’s one of the good guys who rarely gets featured.

“Corey went into the draft in his junior year. I told him as a family, for our children, it’s really important that you finish school. I know he made a promise to his mom. His mom didn’t want him to enter the draft so early. The coaches said it would be good for him, he’d go first round and he did,” she remembered.

“His mom was kind of sad because she really wanted him to get his degree and at the time he would have been the first in his family to get a college degree. It took him a lot longer. He went to class in the offseason. We would go out to Illinois for a few weeks. He’d study and go to study hall. At home, he’d work on his laptop. He did it and the Chargers announced it and now he’s going back to school to get his Masters. There are so many other players who go back to school or teammates who go to Haiti to build houses. There are so many of these stories.”

Faven left me with two funny items that viewers will see this season:

“I’m so un-athletic. I eat healthy. I’m almost vegan. As far as working out I get so tired so easily. I can’t really hang with the girls that are so athletic. I recently got a trainer but we’re starting slow.”

“As individuals, sometimes we don’t accept change quickly. You’ll be able to see that this season with our relationship.”