You are here
Home > Reviews > Entertainment > Green Day: Father of All Album Review

Green Day has a new album entitled “Father of All M-Fers”. We expect nothing less from a band that has never sung a “curse free” concert in their lives, and nor should they. I bought the CD and I’m glad I did. It had a booklet, with photos, credits and actual lyrics for the songs! For a cost of $10.99, fans should go for that or the LP version over the digital format. It made me happy to see that.

There are 10 songs on the album and by now most people, especially NHL fans, have heard “Father of All”, “Fire. Ready, Aim” and possibly “Oh Yeah”.  That song has the hook of rock icon, Joan Jett’s “Do You Wanna Touch Me”. So far so good, three songs in. 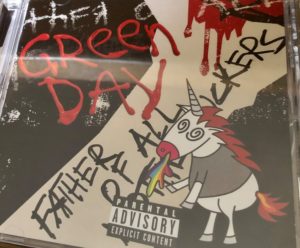 This song has elements of the Everly Brothers, Chuck Berry, an amalgamation of punk bands, and some familiar riffs of their own music.

“I was a Teenage Teenager,” tells a great story. The opening bass line by Mike Dirnt is tasty.

“Sugar Youth” is just like it sounds and it resonates. It sounds like it could have been heard on 1950’s radio until you hear the lyrics “I wanna stab you in the heart”. Green Day would have been censored in the ’50s, they were censored with American Idiot, to some degree, you have to give them credit for staying true to themselves as much as they can in this era.

The hidden gem on the album is “Graffitia”. It’s the last song and it’s an anthem of sorts. A line got me “The city isn’t big enough for dreamers”. When you hear the context of the song it will hit you as well, I guarantee it.

The production value is high and Billie Joe Armstrong has really improved his singing voice and you can hear it on this release. Tre Cool is super consistent and the powerful engine that leads some of the songs.

In the summer heat, these songs will get fans out of their seats!