This article was inspired by a tweet from Shawn Simpson. This is the kind of excitement that the 2022 World Junior Championship is bringing, and it’s early.

Having seen both players and how they interact with their teams. Here’s what I have to say about this.

First off, hat trick aside, and that was an awesome display by Owen Power, something no other defenseman has done in the history of the tournament. The game has changed. Getting a player who can control the game offensively like Power is a weapon. He finds open spaces in the ice to score, and he’s already an elite passer with great vision, and his skating is terrific. His one-timer on the power play can be lethal. He can be physical, but that’s not his game. When Power goes to the net like a power forward, he’s almost impossible to cover. Power averages 24:20 of ice time and .89 points per game. 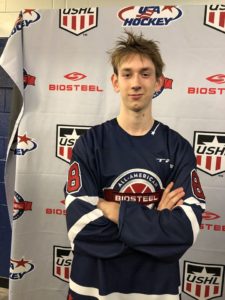 Sanderson’s magic starts in his own end. He instantly starts making players around him with every correct decision he makes. His hockey I.Q. is elite. He rarely takes penalties, and he can shut down the other team’s best player. In the only prelim that Team USA played he had eight takeaways. He’s a horse. He can play the point on the power play, and he has an above-average shot, but his passing is special. Sanderson will play more physically than Powers on the average, and he’s not 6-6. He’s 6-2 and still 189, so there’s room to get stronger.

Sanderson is better on the penalty kill, but both play it well. I’m splitting hairs. Sanderson is averaging .92 points per game.

In the end, both will be stars in the NHL, and the Sabres and Senators will be the beneficiaries. Both could leave their NCAA teams after this season, and nobody would be shocked. Both players will be big additions to their teams. The Sabres need Power badly. That will help Rasmus Dahlin in a big way.

Let’s see what happens when these teams meet up. It will be fun, and the atmosphere in Edmonton will be electric. Two countries are waiting for this to happen. It’s great theatre.