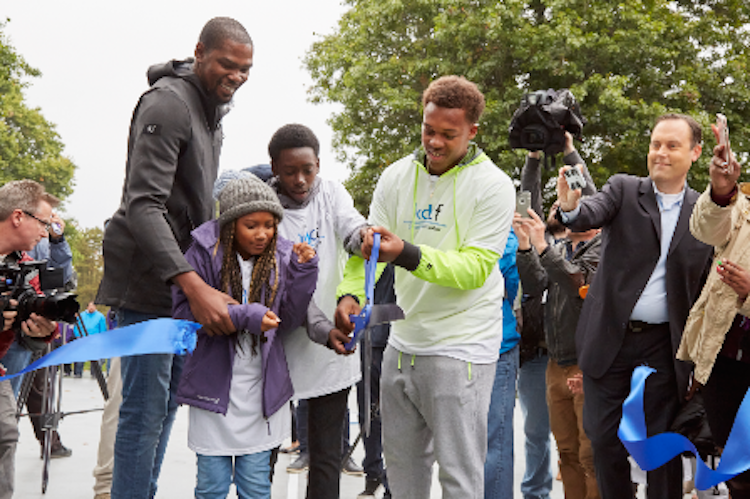 Preston, WA (September 23, 2016) – Sparkling Ice®, part of the Talking Rain® Beverage Company portfolio, is proud to support its continued partnership with NBA MVP, Kevin Durant by unveiling a basketball court renovation in Sparkling Ice’s hometown of Seattle, WA on Friday, September 23rd at Powell Barnett Park. This renovation is part of Kevin Durant’s Charity Foundation (KDCF): “BUILD IT AND THEY WILL BALL” Courts Renovation Initiative designed to increase the number of high quality basketball courts accessible to underprivileged youth across the United States and around the globe.

“Since we first started collaborating with Kevin Durant in 2014, we have looked forward to the day we would work together to unveil the renovated basketball court for our local community,” said Kevin Klock, President and CEO of Talking Rain Beverage Co. “Durant started his professional career right here in Seattle, and we are proud to support his foundation in giving back to our community that has given us so much.”

The court at Powell Barnett Park has undergone a full renovation thanks to a joint effort between Sparkling Ice, Seattle Parks and Recreation and the KDCF. At the unveiling, Durant and Sparkling Ice representatives, including President and CEO of Sparkling Ice, Kevin Klock will be joined by children from the Boys and Girls Club Garfield, and surrounding communities.

These efforts will further extend the KDCF’s reach to new communities in need of improved education, athletic and social programs. As the KDCF continues to expand its social footprint globally, Durant ensures that he connects with each community to reinforce the on-the-ground efforts personally.

“I am proud of the work we accomplished for the BUILD IT AND THEY WILL BALL program this past year,” said Durant. “I have always been thankful for the role basketball played in my life as I was growing up and I understand that access to high quality courts is important for the next generation to learn, play and have fun on. I have seen the success of these courts first hand. And now with the help of Sparkling Ice, I am thrilled to bring the same opportunities to the Seattle community that is so near to my heart.”

Other locations benefitting from the “BUILD IT AND THEY WILL BALL” Courts Renovation Initiative include Oklahoma City, Austin, TX., Guangzhou, China and Berlin, Germany, with other locations in the queue for 2016 including New York, Washington, D.C. and the Bay Area.

ABOUT THE KEVIN DURANT CHARITY FOUNDATION

The Kevin Durant Charity Foundation (KDCF) is a 501 (c)(3) non-profit organization founded by Kevin Durant. The foundation’s mission is to enrich the lives of at-risk youth from low-income backgrounds through education, athletic and social programs. The KDCF’s signature initiative, the BUILD IT AND THEY WILL BALL Courts Renovation works to build or fully renovate basketball courts in underserved communities across the United States and internationally in addition to ensuring the courts are utilized for youth athletic programming. For more information on the Kevin Durant Charity Foundation please visithttp://kevindurant.com/kevin-durant-charity-foundation/. Follow Kevin Durant on Twitter @KDTrey5, Instagram @easymoneysniper and on Facebook https://www.facebook.com/KevinDurant.

Photo: Kevin Durant and Kids from Girls and Boys Club Garfield Cut the Ribbon to Open the Court. Courtesy of “Kontent Partners”