You are here
Home > Hockeyology > Owen Tippett Has Star Potential 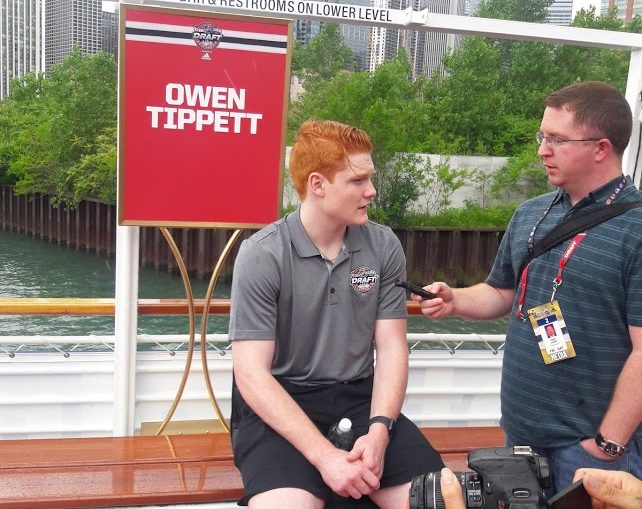 Owen Tippett made his NHL debut against the Philadelphia Flyers recently. He sat and waited. He watched from the press box before he got to play an NHL regular season game. This was a smart move and the youngster understands why the Florida Panthers did this.

“Every game I was watching I wished I was playing but it was good to finally get in,” said Tippett. “I felt pretty good and like you said it wasn’t the outcome we wanted, it was a good first game.”

He took the loss in stride but gained valuable experience and confidence as the game moved on.

“Being a young guy the first few shifts you want to keep it short and keep it simple,” he revealed. “After that I was a little more comfortable and starting doing more of the stuff I could.”

The 10th overall pick from the 2017 NHL Draft looked poised. He had some great dangles and he took seven shots on net. He really looked good and he was one of the best players for Florida that evening. Panthers television personality and Hall of Famer, Denis Potvin, echoed that sentiment in-between periods.

Traveling can sometimes be a pitfall for a young player. NHL travel is so different compared to junior hockey. Florida has a good group of players who’ve been there to guide him. At 18, that’s important for this prospect.

Like most youngsters his family did get to see his first game.

“I had a few people here, family and friends,” he smiled.

Tippett was on a line with Jared McCann and Jamie McGinn. The winger has started his career on the third line. Something tells me he could be moving up if the progress continues. In my estimation, he could replace Evgenii Dadonov who played on the second line but that’s down the road. This was a great first game and let’s see how he looks for his next few.

I ranked this talented prospect 11th on my final rankings. He has a tremendous shot and now he’s showing me some moves that I didn’t know he had. He has a pro body already (6-2, 203). Is he getting his taste of the NHL or will he stick? Only time will tell.