Kailer Yamamoto was drafted 22nd overall by the Edmonton Oilers in this year’s draft. He then performed, like he always does, in preseason and made the Oilers out of training camp. Those who doubt him will be victimized by him in the future.

I had the Spokane, Washington native ranked 19th. NHL’s Central Scouting had him ranked 17th among North American Skaters, so in truth, they underrated him a bit as well. The kid is used to it and he is ready to prove he’s a world class talent.

Currently playing on a line with Connor McDavid is a nice boost for any first-year player. His speed is already among the upper echelon in the NHL and his play away from the puck will keep him in the NHL long-term. 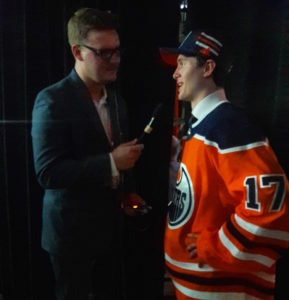 “Well, overall I think he’s had an impact since day one of training camp. He’s continually got better. We saw tonight in a tight checking game it’s harder for him to find ice, but he was still able to strip pucks, make plays,” said Oilers coach, Todd McLellan. “He was over the puck in and around the blue paint. For a young player, he is playing big minutes against some good players right now. He’s being tested. In my opinion, he’s passing the test.”

In six games, he has three assists. He’s still waiting for his first NHL goal but he had a lot of good plays in the game against the Flyers. As a matter of fact, if he had some more offensively minded defenseman on the team that would add to his effectiveness. In that game against Philly he made a great play to get past three players. As he came around the net he saw Eric Gryba. He fired a weak shot on goal. I suspect that happens a few times a game.

“They played a good, solid defensive game. It was hard to get shots off,” Yamamoto stated. “I think we had some good scoring chances but I think we need to generate some more.”

As he gets more comfortable with his new teammates he’ll start to shoot more. So far in those six games he’s only registered 20 shots. That number will rise. McDavid will start looking for him more and more in the future, especially with Leon Draisaitl out his line needs to put up the lion’s share of the points.

“Yeah, it’s definitely tough when you lose with two minutes left in the game,” he said. “We have to come back stronger and more prepared for next week.”

Smart, strong words from a rookie on the road. Connor McDavid didn’t speak after this game but Yamamoto did. He has leadership capabilities and that’s another big reason why I think he’s here to stay.