Womankind is a band that is 100% behind the advancement of women and the belief that they can do anything and should be held back. I recently reviewed their album entitled “Kind of Love”.

Here are the band members:

This is a tight band that play their hearts out on this album. The band members arrange their own parts, and you can really hear it. They really own it. Burger has great range, and this is the klind of album that you can play on a loop and here different things each time. It’s soulful and very easy to listen to.

“We do everything together,” Burger said forcefully. “They created the arrangements for example. We did it all together. To me it’s very important that every musician can express themselves. To create a feel. I don’t just pay them and say do what I want you to do. They are really free too (she chuckled). 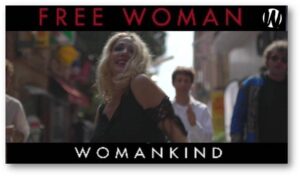 The band decided to film the music video in Montauban to pay a tribute to a very special free woman of the past, Olympe de Gouges, born in this city in 1748. She was the first female activist challenging male authority, writing the declaration of the women’s rights and of the female citizen. She paid dearly for it as She was beheaded in 1793 within the French revolution.

“One day I woke up and said you can get control of me,”Burger chuckled. “This is how it starts….We recorded it with the band. Then Covid-19 hit. Then I was told we should make the video in Montauban….We then decided to do something really happy and really crazy. It took us a year because of Covid-19.”

If you want to see them on tour. Here’s the plan for them.

“We tour currently mainly  in France, also in  close countries like Switzerland, Belgium, Germany, but we are open to also tour in the USA and also Latino America,  obviously when time will let us travel more easily.”

Womankind is really proud to have  Chris Nahon, as film director, Chris Nahon is best known for directing the films Kiss of the Dragon, Empire of the Wolves, and Blood: The Last Vampire.