You are here
Home > Baseballology > PRELUDE: Here come the Yankees

From a stumbling start back in 1903, from owners that since then in the main have set a top drawer tone and a high standard, from managers who asserted their will pushing players to perform beyond their abilities, who established winning ways setting the pattern for others to follow, from stars and superstars and a support staff on the field, behind the scenes and in the broadcast booths, the song of the New York Yankees has captivated and thrilled their fans.

No franchise in the history of sports can lay claim to what the Yankees of New York have accomplished. The Yankees have been in more World Series and won more world championships than any other team in baseball history. They have 27 championships, 18 division titles, 40 pennants, all Major League records.

The Yankees have bragging rights to the five top players ever in World Series history in runs scored and RBIs and total bases, the top three in World Series home runs and slugging percentages. 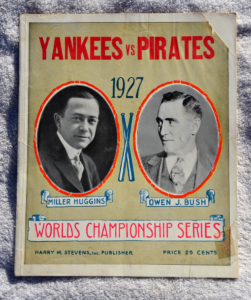 The Yankees have the most retired numbers, the most ever inducted into Cooperstown. Forty four Yankee players and 11 managers are now in the Hall of Fame and more on the way, another Major League record.

The roster of managers who have been leaders of the franchise from the Bronx have contributed mightily to the team’s image and success. Although a few have been indolent; others have been heads and shoulders above their contemporaries.

The eighth manager in franchise history was the self-effacing Miller Huggins, the little man who was arguably the first great skipper in Yankee history. Soaking wet weighing 140 pounds, with boots on still standing below five feet and five inches, he moved the Yankees from middling to mind-boggling.

Joe McCarthy was in the dugout from 1931 to 1946, sixteen years. His Yankees of 1936-1939 won four straight World Series. “Marse Joe” was dedicated, obsessive, honed in to the culture and success of the New York Yankees. His Yankee teams won 1,460 games and compiled a record .627 winning percentage. McCarthy never played a game in the big leagues but did play for 15 seasons in the minors yet he ranks as the winningest Major League Baseball manager of all time.

Charles Dillon Stengel was a piece of work. An unlikely manager for the Yankees, his time from 1949 to 1960 was an era of true Yankee greatness, a time his teams won five straight world championships. Just once in those dozen years did a Stengel team fail to win more than 90 games. His record as Yankee manager was 1,149-696, .623.  In his time as skipper, Stengel was not that young, he mangled the English language and spiced it up with profanity, could be outlandish and crass and cruel and egotistical, but he could manage a ball club, getting the most of every player on his roster.

Disagreeable, driven, disliked by many, Bill Martin seemed to be in pinstripes as player and manager forever. In reality, it was his comings and goings, his five stints (1975-1978, 1979, 1983, 1985, 1988) as skipper and his histrionics, his tabloid exposure that seemed never-ending that kept him in the public eye for better or worse. Martin’s record as Yankee manager was 556 wins, 385 defeats.   His clubs won but one world championship, two American League titles.

With 1,000 career losses as a manager, Joe Torre was a peculiar selection to take over as skipper of the fabled franchise. Arriving in 1996, it was the right time, the right circumstances for him. The first Yankee manager to be born in the New York City area, the calm Joseph Paul Torre was a skilled communicator, a diplomatic handler of players and team owner George Steinbrenner,   He presided over a magical time for the New York Yankees winning six pennants and four world championships. He was selected Manager of the Year in 1996 and 1998.

The Yankees of Babe Ruth and Lou Gehrig, Joe DiMaggio, Mickey Mantle, Whitey Ford, Yogi Berra, Reggie Jackson, Ron Guidry, Thurman Munson, Derek Jeter and the others thru the long decades who stepped up and out and left their mark on the shining story of the team from the Bronx:

The little Willie Keeler hitting ‘em where they ain’t, the Iron Horse Lou Gehrig playing in pain, playing on, the Babe, boisterous, bold, bigger than life, the reserved Yankee Clipper, Joe DiMaggio, one to be counted on, the solid Lawrence Peter Berra, a rock and a sage, through all those seasons as star player, coach, manager, Eddie Lopat with his junk balls, mystifying batters, the live wire Phil Rizzuto, the elegant Jerry Coleman and Willie Randolph,  Ron Guidry, honed in on the mound, the composed and fearless Mariano Rivera, grace under pressure, the monster home runs of Charlie Keller, Bill Skowron, Roger Maris, Mickey Mantle, Chris Chambliss,  et al bringing the crowd to its feet, in dirty uniform, the driven Thurman Munson blocking home plate . . .

Heritage, mystique, ritual, magic, aura, tradition, ghosts, all have all been a part of the package for the New York Yankees.

It is all those pennants and world championships, the standing-room only crowds, the slugging of Aaron Judge, the Bleacher Creatures, the Ballantine Blasts, the White Owl Wallops, the Southern voice of Mel Allen exclaiming, “How about that?” and the New York accents of Phil Rizzuto shouting “HOLY COW!” and John Sterling’s “Sterlingese”

The one-liners passed down from generation to generation:

Waite Hoyt: “It’s great to be young and a Yankee.”

Joe DiMaggio: “I’d like to thank the Good Lord for making me a Yankee.”

Roger Maris: “If all I am entitled to is an asterisk – that will be all right with me.”

Lou Gehrig: “I consider myself the luckiest man on the face of the earth.”

Col. Jacob Ruppert: “Yankee Stadium was a mistake, not mine but the Giants.”

Buck Showalter “Every kid growing up has dreamed of lining up at Yankee Stadium and having Bob Sheppard announce his name.”

Derek Jeter:  “God, I hope I wear this jersey forever.”

Frank Sinatra (singing John Kander & Fred Ebb’s): “…If you can make it there, you’ll make it anywhere… “

Harvey Frommer is one of the most prolific and respected sports journalists and oral historians in the United States, author of the autobiographies of legends Nolan

Some of the material in this piece appears in Harvey Frommer’s newest: THE ULTIMATE YANKEE BOOK http://www.frommerbooks.com/ultimate-yankees.html which can be ordered on Amazon

Some of “the Prelude” is excerpted from his newest –The Ultimate Yankee Book http://www.frommerbooks.com/ultimate-yankees.html available on Amazon.