Today marks the digital release of Pray for Sleep’s newest album entitled “Behind Our Eyes”. On the album, there are some thought-provoking songs like “Scream Back”. The song encapsulates what the band is all about.

“We as a band have a focus on mental and behavioral health. Whether it’s the way people are struggling or what they’re dealing with,” said DeCrane. “This quarantine has definitely affected my mental health and the steps I’ve having to take to keep myself “sane”. We’ve had some nice weather in Columbus so I’m out in a park right now just to get out of the house. The message behind the song is we want to stand up and we want to take action.”

On that track, there is a bit of screaming as there can be with metal bands, and DeCrane talks about how he does that without affecting his vocal cords.

“The vocals are all me. We don’t have any other vocalists in the band at the moment. We didn’t use any effects on that song,” he stated. “If you do it wrong it can be hard on your voice. There are a lot of techniques you can learn. I spent a lot of time practicing different vocal techniques. There is a healthy way to do it.”

The song “Outpatient” really hit me and a lot of other people healthily. 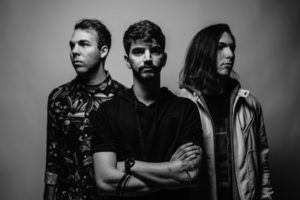 “A goal of the album was to write lyrics that were relatable for people. Even if people didn’t experience the same things. We wanted to write in a way someone can understand a bit more of what someone has experienced,” the lead singer revealed. “Outpatient is one of my personal favorites. It’s personally impactful to me and largely my personal story of the traumas I dealt with as a child. And the long-term effects it had on me. Seeing people relate to it has been interesting. I’ve had a few people reach out about that some particularly.”

When you have a song called “Dear Death”, the listener knows they’re in for something different.

“There’s a common practice in therapy and counseling and they will have their patient write letters to their past self or future self. We kind of took that practice and that’s what the song is meant to be kind of an intro to a letter to death as an entity.”

DeCrane isn’t a big sports fan but he has taken in the local teams in his hometown of Columbus.

“I do enjoy going to live games. I’ve been to a handful of Columbus Clipper games,” DeCrane mentioned. “My little brother, Malki, an exchange student from Japan actually got to play in the stadium for a championship while in high school. I’ve seen the Blue Jackets a handful of times too.”

Arnold Schwarzenegger was once crowned “Mr. Universe” in Columbus and there is a statue to commemorate the event. 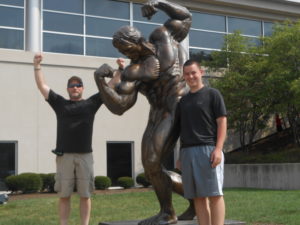 “That’s by the convention center in downtown,” said DeCrane. “We’ve been there for a couple of things. We had a table there for the all Ohio Counselor’s convention for our outreach program the band has built and been working on. We were supposed to play there for the tattoo convention but that was postponed. I hope it gets restarted in the future.

Pray For Sleep will also perform “Scream Back” as part of the annual “We Are The Majority Rally” that brings thousands of young people together to promote the idea that most youths choose not to do drugs and instead are making responsible decisions. For the first time this year, the statewide Ohio rally will go virtual and invites youth across the country to participate. It will be held as part of National Prevention Week on May 15 at 5:00 pm ET, hosted by the Prevention Action Alliance with support from the Ohio Department of Mental Health and Addiction Services as well as the Ohio Governor’s Office. More details about the event, including how to sign up and where to watch, will be posted at

For more information on Pray For Sleep visit:

For information or to get involved with Scream Back, please visit:

To learn more about the On Our Sleeves™ movement visit: https://www.OnOurSleeves.org