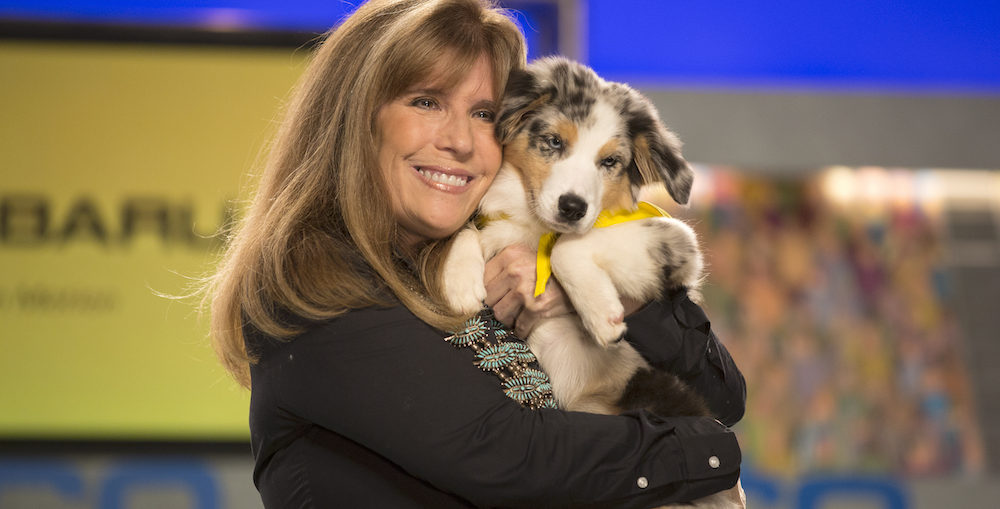 Puppy Bowl is just around the corner and that makes a lot of people very happy. The big game is always a focus for many but this game has a crossover following and just fans of dogs and dog rescue who watch to be entertained and to learn more about some of the cute participants who happen to be up for adoption.

“Just being a part of Puppy Bowl is the greatest gig in the world,” said Rappaport. “I just think being the host of the Pup Close and Personal is the most special role. I get to tell the back stories about these amazing little animals. People may not realize they had quite a tough time getting where they are today. Many were in quite daunting situations before they ended up on the gridiron. I’m just proud to facilitate their story, to be able to share their story and to let people know there are so many perfect, beautiful little animals waiting for a forever home.”

I could hear Rappaports’ dogs in the background. That’s a daily occurrence in my life and so many others. I don’t complain. I gladly made that choice as did she.

“I have my favorite coffee mug that I look at every day that says, ‘who rescued who?’. When I’m the one who feels rescued,” she answered. “We save them and give them a second chance at a new life but look at what they give to us and our lives. I have five rescues and each one makes up a piece of my heart. When I’m not around my little fur angels I’m lonely.”

This year there are some special needs dogs like, Winston, who has vision and hearing impairments. And Lucky, who has three legs. If you think it’s too difficult to care for a dog that has that malady, think again.

“It was my three-legged dog, who had bone cancer, who really changed my life and career forever. You talk about unconditional love. If you’re in a bad mood or you don’t look great. Our animals don’t care about stuff like that. And when my dog came home after having his leg amputated his fur brothers and sisters weren’t looking at him like ‘ooh he’s missing a leg’. We were just so happy to have him home. And these animals just want to be loved, happy, healthy and fed,” Rappaport shared. “And isn’t that a great lesson for all of us?”

As I was interviewing her it felt like she was interviewing me at times as well. We really had a conversation not an interview. When I brought up her gig with PM magazine, back in the day with Matt Lauer. She responded with great laughter and said, “Are we going back that far? Oh no. He had hair and well my hair is about the same.”

“I used to say because I was an entertainment reporter for a zillion years. I ended up devoting my life to rescue and adoption. I like to say I’ve gone from the Red Carpet to the wee wee pad.”

All of the participants have had a DNA test. Ryan Boyko, Founder & CEO of Embark made sure of it.

“Americans spend on average over $400 per dog in veterinary expenses each year, and this amount increases as a dog gets older. We know that the average lifetime cost of vet bills is $9,420. The cost of the test is $199. The Embark DNA test results help you prepare in advance for numerous possible genetic health conditions, allowing you to take preventative steps to avoid costly treatments later on, and reducing the likelihood you’ll face expensive bills for avoidable clinical or genetic tests later on if symptoms of these conditions develop in your dog.”

78 puppies from 34 rescues all across the United States will compete. It’s “Team Ruff” versus “Team Fluff”.

For the first time, Animal Planet’s PUPPY BOWL XIII will air simultaneously on both coasts when it premieres Sunday, February 5 with three hours of fuzzy faces, sloppy kisses and puppy penalties.   “Tail”gating starts at 2:00 PM ET/11:00 AM PT with the PUPPY BOWL PRE-GAME SHOW, featuring aww-nalysis and cuddly commentary from sports correspondents including the infamous Rodt Weiler. At 3:00 p.m. ET/12:00 p.m. PT, PUPPY BOWL XIII kicks off at GEICO Stadium with a special appearance by the furriest weather forecaster in the world – Mr. Punxsutawney Phil. The famous groundhog and two of his inner circle officiate the coin toss to start the game.