Wonderful reactions to Part I, so here as we approach “Jackie Robinson Day” in Major League Baseball is Part II. Enjoy.

Jerry and Mallie Robinson were impoverished sharecroppers who lived in Cairo, Georgia. Jerry deserted the family six months after Jackie was born in 1919. Mallie, strong, religious, family-oriented moved her children by rail to Pasadena, California in 1920 when Jackie was fourteen-months old.

Working as a domestic, the leftovers from the kitchens of families she worked for often made up their daily diet. By 1922, aided by a local welfare agency and a light-skinned black man who play-acted as if he were buying the house, the Robinsons moved into the clapboard dwelling at 121 Pepper Street in a predominantly white and restricted Pasadena neighborhood.

Mallie had her dream house – the family called it “The Big House,” a four-bedroom structure where she would raise five children on her own. And she had no intention of ever leaving it no matter what. Neighbors immediately petitioned to get rid of the newcomers, even offering to buy them out. They also threatened to burn them out.

But Mallie and her kids stayed there with a porch hemmed with fieldstone and bougainvillea. And they paid a price. The family was insulted and picked on. The Robinson boys often had to fight to defend themselves, and young Jackie was involved in scrapes with white youths and had some run-ins with authorities

Sports dominated the lives of the Robinson brothers. Each older brother taught a younger brother and Jackie learned from them.  It was outside the house on Pepper Street where Jackie learned how to run, to leap, to throw oranges from neighbors’ trees. It was where he first fired a baseball and swung a bat under the watchful eyes of his three older brothers. He was a natural.

One day a week he along with other minority children swam in the Brookside pool. They knew that afterward drained the pool for white people. At John Muir High School the young Robinson starred in four sports. At Pasadena Junior College he continued his stellar athletic accomplishments, the lone black athlete on his teams. 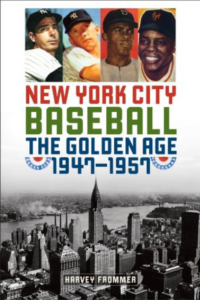 Passing on offers to other colleges, Robinson decided to stay close to home and wound up at UCLA in 1939 on a full scholarship. Very few black players played Division I football. The situation at UCLA was also almost all white. Few blacks attended the college when Robinson enrolled, and there were no black instructors.

In his senior year, needing just a few credits to graduate, his mother needing financial help, Robinson dropped out of UCLA to help support his family. He then played semi-professional football for several teams including the Honolulu Bears in the fall of 1941. Already a drawer and a hero in the black community, his top billing was as “the sensational all-American halfback.”

After an exhibition game in Pearl Harbor on December 5, 1941, he headed back aboard the Lurlineto California. The date was December 7, 1941. Members of the crew were painting the ship’s portholes and windows black. Soon there was an announcement from the captain. “The Japanese have just attacked Pearl Harbor. We are heading to California with all deliberate speed. All passengers should put their life jackets on . . . just in case.” 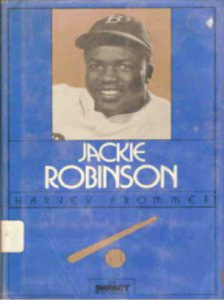 On April 3, 1942, Jackie Robinson was drafted into the U.S. Army. While Jackie was in training, Rachel, to whom Jackie was engaged, was a nursing student by day and a riveter at night at Lockheed Aircraft Corporation.

Assigned to a segregated Army unit at Ft. Riley, Kansas, Robinson became friends with boxing champion and legend Joe Louis who was also stationed there. The “Brown Bomber” used his influence to protest delayed entry of black soldiers to Officer Candidate School (OCS). That paved the way for Robinson becoming a second lieutenant.

A highly publicized incident saw Robinson refusing to move to the back of a military bus. He was subsequently court-martialed for insubordination and didn’t ship out to Europe with his unit.

The incident provides insight into Robinson’s strength of character, his never backing up, never backing down. Later that “steel” would serve him well in breaking baseball’s color line.

Assigned to Camp Breckinridge in Kentucky, Robinson served as an Army athletics coach until his honorable discharge in 1944. It was at Breckinridge that he was informed about the Kansas City Monarchs of the Negro National League. He was encouraged to try out for the team.

The world of baseball that Jackie Robinson knew featured the all-white National League and the all-white American League and hundreds of teams in the minor leagues with only white players. The only place black players were accepted was in the Negro Leagues in existence since 1900.

Since his playing Major League Baseball was not even a possibility, Jackie Robinson settled for joining the Kansas City Monarchs and playing shortstop for $400 a month. The Monarchs, the oldest franchise in the Negro Leagues were owned by J. L. Wilkinson, a white man. The Monarchs would eventually wind up sending more players to the Major Leagues than any other Negro League team.

Robinson was chosen to play in the Negro League All-Star Game that season of 1945. A vital member of the Monarchs, whose roster included the legendary Satchel Paige, Robinson led his team in batting with a .375 average.

During his time as a player for KC, Robinson found time to participate in tryouts for the Major League teams orchestrated by celebrated African-American sportswriter Wendell Smith. 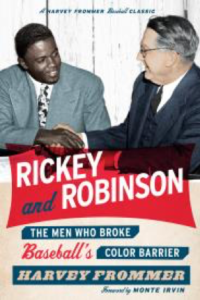 One of the most prolific and respected sports journalists and oral historians in the United States, author of the autobiographies of legends Nolan Ryan ,Tony Dorsett, and Red Holzman, Dr.Harvey  Frommer, a professor for more than two decades in the MALS program at Dartmouth College, was dubbed “Dartmouth’s Mr. Baseball” by their alumni magazine. He’s also the founder of www.HarveyFrommerSports.comand has written extensively about Jackie Robinson