Earlier this season there was a lot of “talk” around how much better Nico Hischier was compared to Nolan Patrick. The Devils had a shot at both and chose the Swiss player first overall. The Flyers chose the Canadian with the second overall pick in 2017. Patrick started out slow out of the gate. Was it recovering from injuries, or his linemates or his getting used to the league? It was all of that and more.

As a 19-year-old center in the best league in the world, Patrick is the kind of player who checks off more potential boxes than Hischier. Does that make him better in the long run? No, they’re different players but the Devils prospect came out of the gate quicker. So, there were more than a few “hot takes” about the two players. 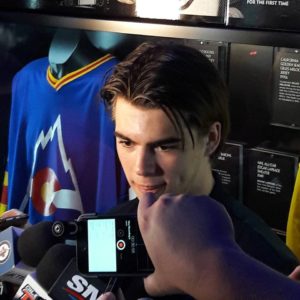 I suspect with the Devils headed to Philadelphia tomorrow, there will be quite a bit of discussion about this subject. It’s fun fodder for fans but as far as player development goes, both are continuing to develop.

Patrick has had a few highlights lately that grabbed some headlines. The positives that haven’t been so obvious have been getting to see his creative side open up thanks to Wayne Simmonds and Jake Voracek. He’s now getting more daring in the offensive zone and craftier. He’s sneaking into some of the open areas and getting more shots as a result. He’s up to 64 after his first 47 NHL games. It’s not enough but he already has more shots in February (15) than any previous month this early in. He had 20 shots in January. He still doesn’t have a power play goal. That could change with some more time. So far, he’s only averaging (1:41) in that category. His overall minutes are up to just over 15 for the month.

He’s really improving on face-offs. He’s over 48% on the season and over 56% percent on the power play. At some point, he should get more time on the ice with the man advantage but they’re making him earn it.

Patrick is healthy, his confidence is growing daily and now the Flyers are on the rise. There is a correlation here. It doesn’t matter how he was used before the point is he’s found his home on the second line and when the franchise drafted him that’s the hope. That’s all you can hope for.

As Patrick gets stronger and faster other parts of his game will pick up. We do see some flashes of physical play, that will pick up. When he is at NHL strength his penalties will go down. Some of them have been because he’s covering some great players who currently have an edge on him. Some have been due to a lack of discipline at times. That will get better as well as this season rolls on and into next season. His hockey I.Q. was always good but now he’s being challenged on every shift in a way that he really wasn’t when he was playing in junior hockey. In the game against Vegas, he didn’t record a point in an important win but he had a 61.1% face-off percentage. That’s something that will really help the Flyers down the stretch.