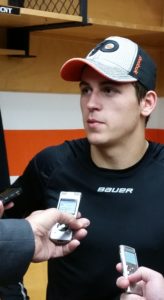 Philadelphia – – Travis Konecny got the Flyers on the scoreboard tonight when all seemed to be lost. The team was down 3-0 and his deflection goal early in the third period, on the power play, gave his team a spark. The Flyers eventually got a 4-3 shootout victory.

It’s always a thrill for me to cover a player after they’ve scored their first NHL goal. There’s nothing like it for me. I cover these prospects well before the draft, see them get drafted, and then keep track of them for many years to come after that. Some of that is a function of making sure my prospect show is the best it can be and the other reason is the passion I have to do it. If I ever lose that I’ll hang up my keyboard.

Dave Hakstol has showed a lot of confidence in Konecny. He played him 17:53. 1:35 of that was with the extra attacker on the ice and that’s when he got that magic goal. So far he has 6 points in 7 games. He’s a +3 and he looks like he belongs. His teammates love him and he adds a youthful spark to the team on and off the ice.

This kid is smart. He knows how to survive out there. He’s not the biggest or the strongest but he has an undeniable will to get into position to create offense and then gets back to play defense as well.

A few teams test him and pushed him around a bit. He overcame that. He’s managed to excel at every level and at the age of 19 he’s on the right track. That’s a big reason why I ranked him in my Top 10 Calder candidates before the season started.

The 2017 Calder Vote Might Be the Hardest In Recent Memory

His teammate, Ivan Provorov got an assist tonight. It was his shot that hit Konecny’s stick. He’s been trying to break into the NHL as a 19-year-old defenseman. Konecny has been very impressed with that and he talked about how hard playing defense is as opposed to playing on the wing like he does. I was impressed with his assessment. It’s something I talked about during the game with a fellow scribe.

“I have been saying that the credit has to go to Jakey (Jakub Voracek) and Coots (Sean Couturier) for giving me that confidence game in and game out. They set me up and they gave those great opportunities. It builds my confidence and I feel it in my game that maybe that point or that goal is coming because every shift they are pointing me in a good position. I just have to move my feet and get to the right spot. Credit to them and good shot by Provy there (Ivan Provorov) that is something that we work on in the power play, I got the puck in the net and it just happened to hit my stick.”

So far, so good for Konecny.