You are here
Home > Wrestleology > When Ali and Frazier Fought For The First Time, The World Was Watching 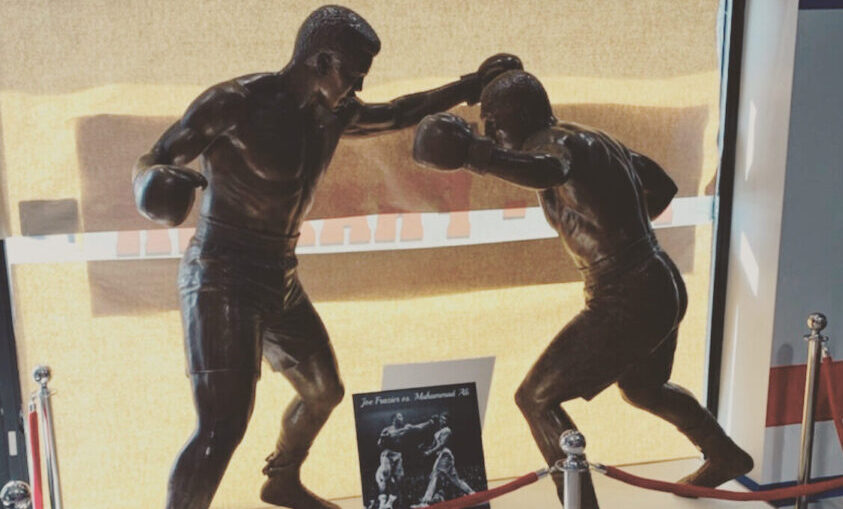 If you were lucky enough to watch the first fight between heavyweight champion Joe Frazier and former champ Muhammad Ali on March 8th, 1971, it was either in person at Madison Square Garden among the celebrities and people willing to pay big money, or on closed-circuit broadcasts in movie theaters and arenas.

My family loved boxing, especially my dad. He watches to this day and we all watched it together on Wide World of Sports, even knowing the outcome. It didn’t matter. I am watching the fight again today at 2 PM ET on ABC Sports.

Billed as the “Fight of the Century”, two things stood out that helped me become a Joe Frazier fan for life. The first was this was the battle of the undefeated heavyweights. That had never happened before. Ali was 31-0 with 25 knockouts after having his title stripped and Frazier was 26-0 with 23 knockouts.

“I’m 57-years-old. It seems like, I can’t say yesterday, but it seems like it wasn’t that long ago,” said Weatta Frazier Collins. “I miss those times dearly because my father has transitioned to heaven. It’s been quick! We’re grateful and we’re trying to make sure that individuals continue to know about Joe Frazier.  I have siblings speaking, doing Zoom calls. Especially with Black History Month that just passed. And trying to educate kids that you can do anything you set your mind to. Even if someone tells you you’re not going to be able to do it. Find something you like doing and enjoy doing. Work on that craft and build from there.”

When Frazier dropped Ali with a left hook in the 15th round, Ali was able to get up and finish the fight. There was little doubt at that point that Frazier was going to win the fight, but it was amazing that both fighters connected with big shots during the bout.

Was this the best fight still in the history of the sport? I think it is.

Frank Sinatra took pictures for Life magazine. This is worth watching again and worth watching the HBO documentary on the amazing fight. It had a lasting effect on me.

“I was on a call the other day with some dignitaries and the promoter. It was a big deal and the guys that were talking were like little kids at a candy store,” Collins smiled. “They said it was so smoky in the building. One guy talked about spending $35 on a ticket and he said that was a ‘rip-off’ and had to use the Easter and Christmas money that he had saved up but said he was grateful that he went.”

Frazier was the quiet type and Ali was the opposite and that was a source of annoyance for ‘Smokin Joe’.

“Dad used to call Ali ‘the mouth’ or ‘the mouthpiece’ at one time. He said let’s see after all this talk what happens in the ring,” Collins remembered. “I have this famous clip with Joe signing papers at a table, Howard Cosell was in the middle of them, And Ali is talking and talking and talking, my father said, ‘you’re not fighting Oscar Bonavena, you’re not fighting Jerry Quarry, you’re fighting Joe Frazier’, like, don’t get it twisted. Joe said remember what you said that you would crawl across the ring if you were victorious.”

Collins runs The Legacy Exits non-profit and is promoting an online auction that everyone should bid on. It’s going to a great cause. https://www.thelegacyexists.com/

“As you know, I set up the 5013c, and I’m trying to raise $50,000 and my one daughter, that graduated from St. John’s, she was the first one that I asked, and she asked how much. I said we were going to raise $50,000 and she said that shouldn’t be a problem. “That’s not a big number mom. Your father was known all over the world. We shall see. I’ll get my grade on Tuesday. This is our sixth year. Being able to give back to kids, before kids get the money at our previous banquets but you have to pay for all of that including $250 on balloons.”

I once attended her event, and it was first class.

“These at-risk kids need help. Some boxers are doing so well and used to spar and work out of Joe Frazier’s gym. They used to call The Legacy Exits. And now that’s not happening. I live outside of Philadelphia.  I’m putting some people on the hot seat on Monday. We are constantly applying for grants. I was awarded a grant for $10,000 and that’s the biggest we’ve received. I’m waiting for the big boys to come out on Monday. I’m doing this in my spare time. I work full time.”

On Monday, there are a lot of events scheduled in Philadelphia.

The 50th Anniversary of The Fight of The Century, the first Ali vs Frazier fight at Madison Square Garden is Monday, March 8, 2021. In honor of this special event in boxing history, the family of Joe Frazier will host an online silent auction to raise funds for The Legacy Exists, Joe Frazier Scholarship Fund, which was established in his memory to support AT Risk Youth.