With the Super Bowl behind us thoughts turn in New England to perhaps the area’s most beloved sports team –the Boston Red Sox. Herewith for your reading pleasure, snippets about the Old Towne Team. Enjoy. 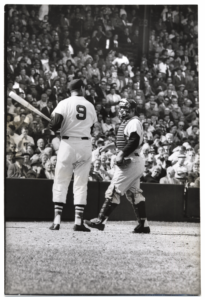 MEL PARNELL:  I was 25-years old in 1947 when I went to spring training at Sarasota, Florida, with the Red Sox. There were two spots open on the pitching staff, six of us vying. Harry Dorish got one; I got the other.

I came into Fenway Park for the first time and saw that leftfield fence, and I thought maybe I had signed with the wrong organization. But it helped me work on making a change in my pitching style. I came up as a fastball pitcher but soon realized I would have to use a lot more breaking stuff. Pitching at Fenway Park makes you a better pitcher as you move along.

I pitched  my first major league game on April 20 against  Washington. Frankie Hayes, an old veteran player, was my catcher. I lost that game, 3–2, on a passed ball. I guess that’s why I remember Frankie.

It truly impressed me as a rookie kid to see Mr. Yawkey on the field taking batting practice with us.  I didn’t see him hit any balls out, but he got some close to the wall. The kids who worked around the ballpark would shag flies for him. When he was done, he would give each one a twenty-dollar bill.

SAM MELE: I started my major league career on April 15, 1947.  It was against the Philadelphia Athletics at Fenway Park. I walked my first time at bat. Then I doubled off the left field wall. Next I singled. Then I walked again.

I was just thrilled to be there in the outfield with Dom DiMaggio and Ted Williams.    “Any ball you can get, you chase me the hell off,” second baseman Bobby Doerr would tell me. “But don’t yell ‘ I got it, I got it’ just once. Two or three times and I’ll get the hell out of the way.” We would never run together and never did a ball drop in.

I did not shoot for the Green Monster.  No.  I was an all-around hitter, a line-drive hitter, a damn good one too.  I loved to hit in Fenway.

SAM MELE:  I was moved around by the hand signals. Ted and Dom were veterans and I was just beginning my career. Well, every team was different naturally.  Guys hit to right field no power, give me the palm, go in.  Go back against the good hitters, like Mo Skowron, go back.  He had good power to right field.

Right field, oh how fucking tough that was to play. The sun came right over the stands.  And the  carom along the right field fence… you cannot go directly towards the wall for the ball.  You gotta surround it because it curves.  And if it ever goes by you it would end up, oh, half way to centerfield.

I always sat next to Williams in the dugout.  Matter of fact he would call me over if I didn’t. “You sit here.” He used to tell me about the pitcher: “Look for this, look for that, he’s fast, but his ball doesn’t move as much as somebody else’s.“

If he didn’t know that pitcher he would go up and down the whole dugout wanting to know: “Has anybody seen this guy?  How’s his curveball?   Slow?  Does it go down and in?  Has he got a sinker?”  Things like that.

On May 13, 1947, Ted Williams more than made good on a promise to a boy in the Malden hospital that he would hit a homer for him. “The Kid” hit two home runs for the kid. Both were pounded to left field, the first pair he’d hit there in his career. The roundtrippers paced  a 19-6 walloping of the White Sox.

The Red Sox’s longtime owner was never enthusiastic about night baseball. As The Boston Globe’s Hy Hurwitz reported, “Yawkey is strictly in the baseball business” and added that Yawkey didn’t “believe in fashion shows, nylon hosiery, door prizes and other nonsense.”

Finally, bowing to League pressure, Yawkey yielded, agreeing  to 14 night games, two with each American League team. The Red Sox became the last club in their league to play under the lights at home.

One of the most prolific and respected sports journalists and oral historians in the United States, author of the autobiographies of legends Nolan Ryan,, Tony Dorsett, and Red Holzman, Dr. Harvey Frommer is an expert on the New York Yankees and Boston Red Sox  and has arguably written more books, articles and reviews on the Yankees than anyone. In 2010, he was honored by the City of New York to serve as historical consultant for the re-imagined old Yankee Stadium site, Heritage Field

A professor now for more than two decades in the MALS program at Dartmouth College, Frommer was dubbed “Dartmouth’s Mr. Baseball” by their alumni magazine. He’s also the founder of www.HarveyFrommerSports.com. Autographed copies of his books are available from the author.