I thought you’d enjoy this. If you haven’t seen the story of David Ayres, the 42-year-old Zamboni driver who serves as an emergency goalie not only getting in the

game for the Carolina Hurricanes this week but helping secure a victory against the Toronto Maple Leafs, it’s worth taking a look at. Before, during and after the game fans reached out to Upper Deck sharing they wanted to see cards of Ayres in new hockey sets, but there was one major problem, Ayres is not a member of the NHLPA. That means Upper Deck would need to secure an individual deal with Ayres to appear in new trading card sets and that’s EXACTLY what we did.

David Ayres will have his first-ever Upper Deck NHL® trading card available this week through the company’s Game Dated Moments program on e-Pack. Images of the front and back of this card commemorating this incredible moment are attached. These are physical cards that can be mailed to collectors and here is more on the Upper Deck e-Pack™ Game-Dated Moments program with cards releasing this week: https://www.upperdeckblog.com/2020/02/2019-20-game-dated-moments-week-21-cards-are-now-available-on-upper-deck-e-pack/ 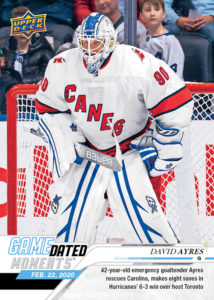 Upper Deck has a few more surprises in store for collectors with regard to future Ayres content. Stay tuned!