You are here
Home > Hockeyology > Mattias Samuelsson Has a High Ceiling

Mattias Samuelsson is a 2018 NHL Draft-eligible player. At 6-4, 217 pounds this talented defenseman has more to give than just being good in his own end. Keeping track of speedy forwards is difficult.

“Some players are pretty quick. You just have to angle them the way you want them to go,” Samuelsson said. “You try and force them to do what you’re comfortable with. Most of the time you just want them on the walls or the corner and hopefully get a stall on the boards and have your teammates come and help you.”

He just captained the U18’s and has played top pair for the NTDP and yet I feel many have undervalued him in draft rankings. I currently have him ranked 14th on my second list. The main reason is he’s already a great skater and steady on defense. But he has a great point that can be utilized on a power play someday.

He’s smart. He knows when to pinch. He also has a mean streak, that can have him end up in the penalty box, but I’ve also seen him use it to dislodge a player from the puck and watch his teammates make a great play as a result. He is great in the room.

“We all just believed in each other and the process,” Samuelsson stated, after a big tournament win. 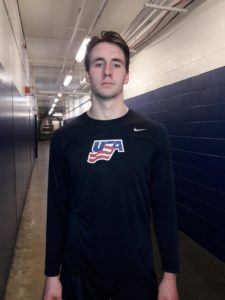 Kjell is his dad and he had a great hockey career. Also, a defenseman, I always say his son has some of his traits, but I think he’s better, because of his skating and his offense. He knows how to pin an opponent against the glass.

“Yeah, I learned that from my dad. He is a very big man. He taught me that side and I have a big frame. I definitely try and use that to my advantage,” he smiled.

Talking about his dad, the kid has done his research regarding his time in the NHL.

“He retired in ’99 and I was born in 2000. I never got to see him live. I’ve seen highlights of him trying to protect Hextall,” he said, crediting YouTube. “That’s mostly what it is. Hextall coming out of the net and my dad flying in there to help him.”

Statistics don’t tell the story with this player. Watching him and talking to him do. I think there’s a great chance a few teams will covet him, and the rest will hope he’s still there when it’s their turn.