Pittsburgh – – Paxton Geisel is a 2022 NHL Draft eligible prospect currently playing with the Dubuque Fighting Saints in the USHL. Geisel is a 6-2 goalie with a lot of talent and he should be a great addition to Dubuque this season.

“It’s just like any other season. I prepare the same way. The draft is coming up but you try not to think about that too much,” said Geisel. “You just focus on the here and now and day by day.”

Last season Geisel played in the NAHL for the St. Cloud Norseman. He played in 40 games and had a shutout. It was a good experience for this prospect and playing that many games last year was good for his future development.

“Goaltending is a developmental position,” Geisel added. “Guys are going to college super late and end up being studs. Everyone is different. The NAHL was a developmental step. I could have tried to make a USHL team last year, but I wasn’t sure I would play a lot. This was crucial for my development. I can’t tell you why but the NAHL is a goalie factory, Connor Hellebuyck, and Anthony Stolarz came from there as well.” 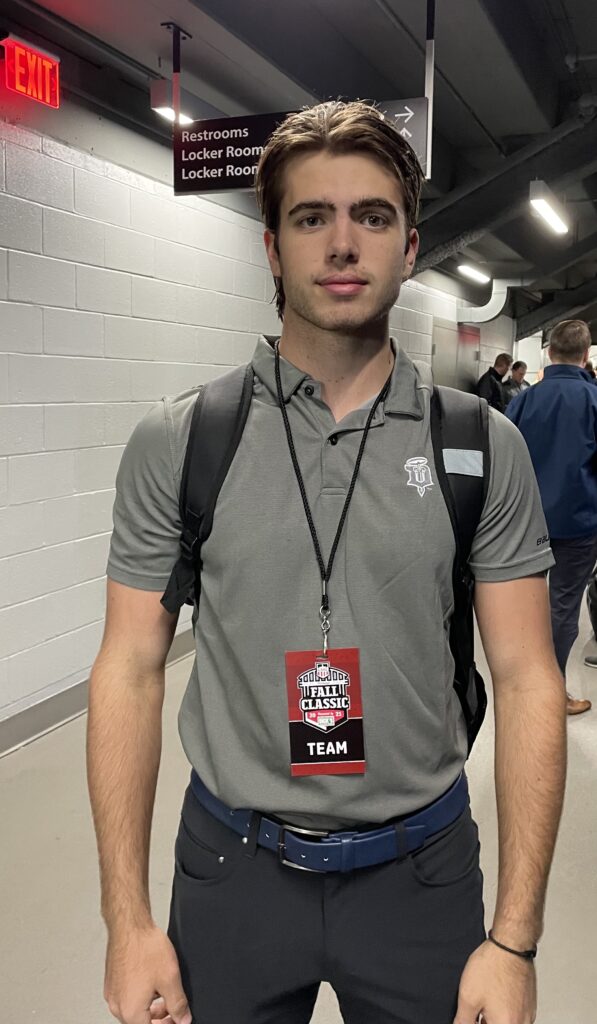 His first game happened during the USHL Fall Classic, and he got his first USHL win. During that game, I thought he had a good glove hand, and he hugged the post well. Geisel makes good, safe clears with his stick, and he can handle low shots well. He steers his rebounds to safety. He went down a bit early a few times, but all in all, he had a solid first effort. Next year he will be doing that at the University of Denver.

“I grew up in Calgary, and it’s so much like Calgary. I love the coaching staff. I like the mountains. The campus is unreal.”

Over the summer, as with most players, he worked on a few things to try and improve his game.

“I did both mental and physical. The position is a mental position, but a lot of physical work goes into it too,” Geisel stated.

With a strong season in Dubuque, Geisel will have an excellent chance of being drafted. That’s his plan, and so far, his plan is working.