I’m always hearing people say, and I’ve said it, how did that player slip into the sixth or seventh round of an NHL draft? This year I’ve identified one that has a promising future, and that is Alex Young, and the San Jose Sharks selected him with the 196th overall pick.

For the past three seasons, this center has been starring for the Canmore Eagles in the AJHL. His last two seasons have been tremendous; 156 points in 112 games with 70 of them were goals. In the playoffs, he ramped it up scoring 13 points in nine games. Cale Makar once starred in that league, and it only makes sense that more players will start to break into the NHL.

“He’s not a huge kid, but he started the year scoring a goal and the way he scores. He’ll go anywhere to score. We had watched this guy over two years. We have guys living out there, and they were high on him last year.” said Sharks Assistant General Manager, Tim Burke. “He’s going to Colgate, which we like. He’s going to play a lot.”

“That whole thing about where are you going to go to school? If you look at the history of NHL players, I don’t hold what they think it does. Going to Colgate for us was actually a plus. He’s going to play right away.”

“With Young, it was a situation where he was already committed, and he was going to go back to the AJHL another year, and he put up quite a few numbers again,” Burke reiterated. “This is one of those picks you know you can wait on a bit. But there is a scoring history there. He’s not the biggest guy, but he scores goals in hard ways.”

Young has versatility, and that could be a big plus for him down the road.

“Young has played a great center, left, everywhere. He played with his brother (Colton, who currently plays for Colgate) two years ago. He was on the All-Star team there. He played against Makar early on,” Burke stated. “There’s been some decent players out of that league. Like Andy McDonald (Ducks) played there. People missed out on him, I’m not saying he’s Andy McDonald, but he did ok by going there, and so did (Chris) Wagner, he knocked out this league, now playing with (Charlie) Coyle. Nobody believed it and were asking why he wasn’t going to BU or BC and look what’s happened to Wagner right now.”

Many times, NTDP players who have to battle for ice time do much better on another team, and it helps them down the road.

“I’ve looked back since the beginning of the development program. If you just go back 10 years, Troy Terry, Anders Bjork, Connor Carrick, it’s not a negative on the program, they all can’t be top players there and when they go somewhere else it’s “their time” or maybe they mature on a different level,” Burke responded. “If you come out of the BC junior league, everybody goes ‘wow, he must be something’. When you come out of the Alberta Junior League, since Makar, like the guy Brinson Pasichnuk out of ASU, look at his numbers from the AJHL. He wanted to play with his brother and stay close to home. Is that a negative?” 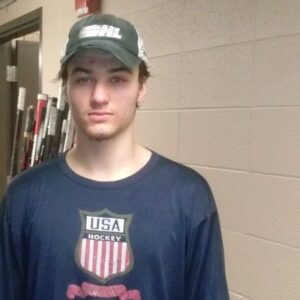 I remember talking about how the U.S. Program missed on current Sharks forward Kevin Labanc (pictured above).

“He was a late birthday, so he could technically only stay for one year because you’re not going to be able to play in the tournament. Schools were talking to him. He was academically “ok” and probably could have gone somewhere, and then he said he just wanted to play hockey, and that’s why he went to the OHL and made that decision,” Burke remembered. “We drafted him in Barrie, based on what we had seen before, there were games, during the year with the U.S. program where he got more ice time because guys were gone for tournaments, and showed well in the All-American Prospects Game too. In Barrie, in his draft year, he didn’t have a lot of goals. Then he took off after that. He needed to be a hockey player, I don’t think he was cut out to sit around on Notre Dame or Wisconsin’s campus and wait to play hockey. He’s a rink rat. He has to be in the rink.”

Burke remembers what happened to him when he was playing, and it was offseason.

“When I was away at school, I was actually playing fall baseball. I was having withdrawals not being at the rink because it didn’t start yet,” said Burke. “This happens to kids. It’s happening to my little grandson now. They had two weeks off because they closed the rinks. He didn’t know what to do with himself.”

“We want guys to play. I don’t care what league it is. We want them to play in games. I don’t care if you’re on the ice with McDavid and all these pros for a scrimmage. It’s not the same. We want them all to try and play somewhere. I’m telling you right now, if a hockey player between 18-24 is off the ice, by not playing the game with some degree of contact, and intensity, for that length of time, You’ll lose something. You will definitely lose something. No kid is going to recreate what happens in a game over a nine-month or 11-month period. It won’t happen, so we’re placing players all over the place.”

Young scored a goal to start the season in Colgate. They lost 2-1 to Clarkson, but he got on the scoresheet. Keep an eye on this kid.