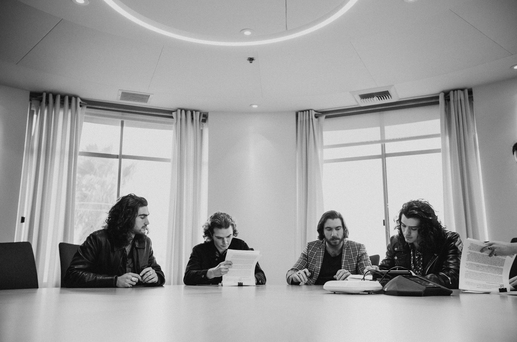 Here’s what they’re saying about the band::

Praised as a modern salute to the classic British invasion and the southern rock sounds of the ‘60s & ‘70s with their catchy riffs, gritty vocals, and infectious hooks, The Jacks features Jonny Stanback (vocals/guitar), Tom Hunter (guitar/vocals), Scott Stone (bass/vocals), and Josh Roossin (drums). The quartet originally met and bonded over music while attending USC in Los Angeles, and by the end of 2018, The Jacks had self-booked two U.S. national tours, played major rock festivals such as Louder Than Life, Aftershock and SXSW and sold out historic Los Angeles venues such as the Troubadour and Roxy.

Stone answered the question if ‘Rock is Dead?” and what his band is about.

“The way we play together. The music we write is just who we are. We never thought rock was dead. It’s the music we love to play but it’s a great time,” he replied. “It’s definitely not the most popular genre right now. Hip is probably. It’s pushing the boundaries and changing the face of the game almost every day. Which is tougher for Rock N’ Roll acts to do. We try and change the game by not trying to reinvent the wheel.”

There are a lot of great bass players in the world. Stone had quite a few to decide who were his faves.

“Jack Bruce from Cream is a reason I play. John Entwistle (The Who), he’s the reason I play bass in the first place. I love Pino Paladino as well,” he added.

Stone was born in a time where he missed seeing some of his influences playing on a live stage.

“I’m 25. Unfortunately, I never had a chance to see Entwistle live. I never saw Jack Bruce live. I was able to see Paladino a couple of times. The music found me in a way. It was a little bit of my parents. It was more of my friends. We’d try and see a show a week.”

Every company has a mission statement. Does his band?

“Our mission statement we’re excited to get these songs out there. We’ve been sitting on them for a while. We’re excited for the future of Rock and all the bands out there, working with Universal music and Edgeout records,” he said like a pro.

Like every person who walks the planet, he has a favorite band, but he takes it a step further and names who he’d love to play on the same bill with.

“It’s a tie between two for me. Rolling Stones are probably #1. Second is Oasis for me if they were able to get back together. That would be a dream come true for me.”

His favorite shows to date are some pretty big venues. 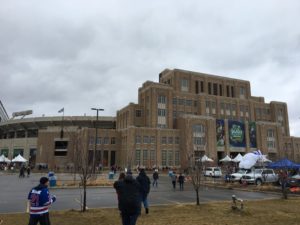 “We got invited by South by Southwest, the 2019 Super Bowl and we did the 2019 Winter Classic recently. It just feels like it’s rolling in the right direction.

“We played during warmups. About 30-minutes before puck drop.”

“If I had to pick a team it would be the Los Angeles Kings. Although my hometown might disown me because I should technically be a Ducks fan. I love watching it. I’m more a fan of the sport and not a particular team.,” he said backpedaling.”

Learn more about the band here: