You are here
Home > Hockeyology > The Zen of Jet Woo 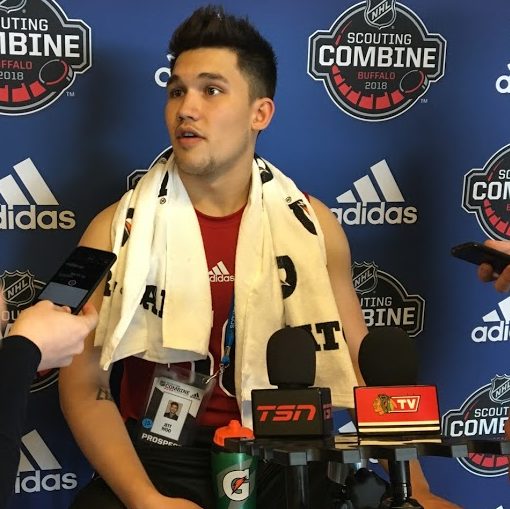 The most interesting defenseman in this draft, in my estimation, is Jet Woo. Will he be a first-round pick, or won’t he? Did scouts see enough of him this year? They know him, so I’d have to say yes but he did miss some time and that can affect where a player gets picked.

Jett will make history at the draft. He will be the highest drafted player of Chinese descent. His dad is Chinese. That’s not the focus of this article. The focus is how cool of a guy he is. He has a very Zen approach to life.

Woo doesn’t worry about anything. If he does he’s great at hiding it. He has a tattoo on his right forearm (just visible in this picture). He explained what it symbolizes and that might explain why he seems very spiritual.

“The three triangles represent body, soul, and spirit, Woo said. “They’re connected so it makes a W. The triangle is cut up to include my brother and my sister and we are all connected by the same spirit.”

In his short career with the Moose Jaw Warriors, he has played in just 137, including playoffs, in the last two seasons. The second part of his season wasn’t great, and, in the playoffs, he didn’t reach the kinds of numbers one would expect from him (3 points in 14 games) but something tells me some team is going to take him late in the first round. It only takes one team to believe in a player.

“It was difficult, and I did speak to people who said they were just missing me when I wasn’t able to play. Hearing that was difficult,” he divulged. “It was easy for me to come back with the team and the entire organization was behind me and to get back and do well in the positions I was put in.”

You can’t break this guy’s spirit. He will be able to overcome a lot of obstacles in life. On the ice, he has a lot of talent, a pro body (6-0, 205) besides speed, strength, and power play ability. Simply put; he’s a competitor.

“Going through those injuries and then persevering and doing well here at the Combine. It’s something I take with pride and I’m proud of myself,” he proclaimed.

He did well in the Vo2 test and surprised himself. He didn’t have to use the vomit bucket.

“It got close at the end, but I was able to beat my previous score,” he laughed.

The Winnipeg native can play, and his maturity can handle the other factors that players have to deal with. He spoke to a fair number of teams and I think he has an excellent chance to go somewhere in the first round, most likely near the bottom five picks.