The first thing that should stand out to the readers of Voices of the NHL is there is a representation for every team in the NHL pre-Seattle Kraken. That’s a hard task to make that happen, so I applaud the author, Matthew Blittner for that to start. 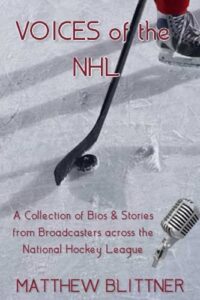 I immediately turned to page 275 because I know Jim Jackson, who calls the game on television for the Philadelphia Flyers. I knew some of his background because of the numerous press box chats but his background is very close to mine! Also, I covered one of his most memorable Flyer’s games and watched the other.

This book is great. You can look up your favorite team first and then even some of the networks that covered the game. This is a delightful tome.

This book has a great balance of American and Canadian radio and television talent and stories. I think it will please both.

This book made me feel old because a generation of hockey players from when I was a teen, like Wayne Gretzky, were very influential to these broadcasters. Oh well, it was the same for me, and that’s why this book resonated.