Queens – – The Rangers beat the Sabres 3-2 in an overtime thriller in the tenth Winter Classic. 2008 was the first in Buffalo and it’s come full circle with the Sabres playing in the 10th. Sadly, they lost both games.

This game had more than 41,000 fans dressed as warm as they possibly could. The atmosphere at Citi Field was good and it was a celebration of hockey. That’s what these games turn into.

“For me personally, I enjoyed every minute, starting yesterday. And thank the Mets for hosting us. It’s been awesome since we walked through the doors yesterday, the way they’ve been taking care of everything. And it’s a nice room to be in, too, a lot of space,” said Henrik Lundqvist.

“The King” is having a tremendous season and he seems to have a killer instinct going when it comes to locking down games. He told NBC this game would only be fun if they won. He may not be the captain of the team but he’s the leader and their most valuable player. He could be a Hart Trophy finalist as well as the Vezina this season.

“Obviously the last time we got two opportunities. But, really, all the people that put this together, the league, and I think they do such a great job,” Lundqvist added. “I could easily play one every year. And I would not be tired of it, because you play the two games, but to get this opportunity in front of so many people and excitement around the game, it doesn’t get old to me.”

For as long as fans keep filling the stands and players want to participate, the Winter Classic will continue. 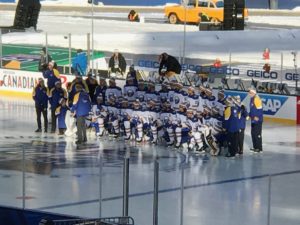 The game wasn’t looking its best on television. A lot of viewers complained about the camera angles and the shadows. This might be the time to bring back the glowing puck and use it just for the outdoor games. It won’t be gimmicky this time around and it would help enhance the home viewing experience.

For the Sabres, they got a point, it means nothing in the standings, but to coach, Phil Housley he’s starting to see some improvement.

“But just recently, if you look — I think we’ve got nine points out of 12 games now. And we’re just playing a better brand of hockey. I think you can see the confidence growing in our guys, which could have been that way early in the season if those games are flipped,” he added.

The ice was good and the players are better equipped to play outdoors. Their clothing, preparation and now the speed of the outdoor game has all improved over the last decade. This game will always have its detractors but it was a big success once again, financially and in the minds of those who attended.