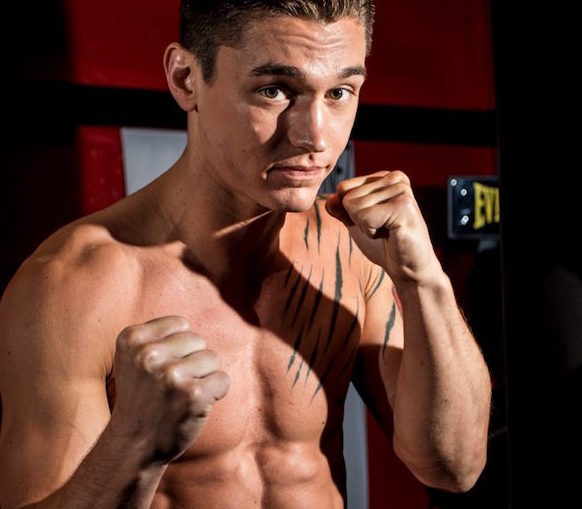 Dustin “The White Tiger” Fleischer is a very successful up and coming boxer. The welterweight has been working his way up the ladder, the right way. He has a lot of pride and now he has something else on his mind. It’s still boxing but on Brown and Scoop CBS Radio’s Play it he challenged a well-known, UFC star (audio link below).

Fleischer isn’t simply mouthing off here. Check out this previous article for his backstory:

Pride can make somebody rise up and speak out against something they feel has little merit. McGregor has had a great career and now that he has fame he thinks he can fight the best without trying to earn his place in the sport of boxing.

“I’d be your best step to step into the ring. If you beat me, then maybe you deserve a chance at Floyd. But you ain’t going to skip me and get the biggest payday in boxing bro. When Michael Jordan went into baseball, he worked his way up the minor leagues. Let’s see how you can do in the ring with another real boxer in boxing bro,” said a fired up Fleischer.

The boxer against the MMA fighter is an interesting one. What rules would take place. A long time ago, Muhammad Ali “fought” Japanese wrestling icon, Antonio Inoki. That was a farce because the wrestler couldn’t wrestle. This match, if it were to happen, could be boxing rules or MMA rules. The challenger doesn’t seem to care.

Talk is cheap and there’s a real good chance McGregor doesn’t bite. He is involved in the upcoming UFC 202. I have the sense that Fleischer isn’t doing this for a payday. I don’t think he’s doing this for attention. That’s not his style.

On the other hand, McGregor recently called WWE grapplers “messed up pussies”. He seeks out attention.

CBS Radio did throw this into the mix.

“There was a riff between McGregor and fellow UFC fighter Frankie Edgar. Edgar has called out McGregor in the past for ‘conveniently’ not fighting him yet. Edgar happens to be a sparring partner of Fleischer.”

Here’s an audio link of that radio interview:

Boxing legend and former heavyweight champion, George Foreman there in his two cents, “Defeating Mayweather is out of the question. Time will defeat him (McGregor). Mastering boxing is mastering all martial arts. He (Floyd Mayweather) has mastered defense and stamina.”

Fleischer made this final statement.

“I’ll take McGregor out, I’ll say, I’ll give him three rounds,” he stated. “That chin flies up in the air, he’ll be down on the mat real quick.”