Keystone Comic Con is entering its second year and the folks at ReedPOP did a nice job last year but now they have to follow that up with another strong effort and it appears they are more than up to the task.

“So, we actually start planning next year’s show even before the current show starts,” said MK Goodwin, Event Director of ReedPOP. “We are looking towards the 2020 show which is kind of crazy. We do a lot of listening after the show is done with post-show surveys that tell us what they liked, didn’t like, who they want to see, we also talk to fans on social media and that helps guide us for the next year because it’s the fans we are building it for.”

Fill out those surveys and tweet them, they listen! Getting the guests lined up is a hard task and once again they have a great guest list!

“It’s very challenging but we have a super crackerjack staff team that works on our guest and they are very sharp, and they work on all the challenges,” she revealed. “A lot of these actors that we are pulling in and they are still working actors and then there’s family commitments and other sorts of commitments. It’s really building our schedules around their schedules and letting the fans know plenty in advance so they can plan and see who they want.”

“There are a lot of moments like that and that’s why we always recommend having a camera at the show. Just kind of be ready because anything can happen. There are a lot of guests are there technically working but they’re also human beings that like to have fun. We love to see those impromptu moments. They do something like that; you can’t see that anywhere else,” Goodwin replied.

Tommy Dreamer is back with live wrestling every day!

“We did take the time to get to know the Philly fans. Keystone Comic Con that has the wrestling live on the floor. Fans were very clear about that. They liked it and wanted to watch it.”

Will we ever see an act like Cirque du Soleil? Does anything prevent them from having something like that?

“Honestly, nothing really, if it’s what the fans indicate that they want at the show we will always try and make it happen,” she stated. “The thing about pop culture is it really encompasses so much, and you can be a fan of so many different things.” 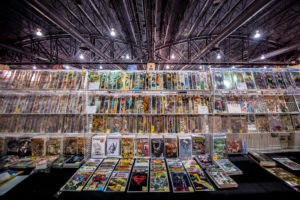 “We have over 100 artists in artist alley that are showing off their work and we have entire autograph sections, with guests from multiple genre’s like “Harry Potter”, “Star Trek”, and MCU, and we also have a large gaming area this year,” she added. “It’s quite expansive and it includes tabletop gaming and local fan groups. Gaming is localized.”

There are some great photo areas like the Philly Avengers, Harry Potter items and a Star Wars fan experience area. There will be backdrops and replica movie props.

John Carpenter will be a big draw. Fans said they really wanted to see more horror content at the show.

“We have Christine the car by yourself or with John Carpenter.”

“I’ve always been in events, and I started at Reed Exhibition, the mother company of ReedPOP. It focuses on B to B, so events like hardware or golf. But when the comic cons got larger, they needed more employees,” she revealed. “I said to myself ‘this is the most amazing thing that ever exists and need to be a part of it’ and so I pointed my career on getting on to the ReedPOP team and do this for a living.”

Here’s one tip. It has to do with footwear.

“Wear your most comfortable pair of sneakers. DO NOT WEAR NEW SNEAKERS!,” she chuckled. “I made that mistake once. There’s a lot of walking and standing. Unless you are cosplaying and it’s integral to your costume, do that. The pain lasted a couple of weeks and I learned my lesson.”

The dates are August 23-25. Check out the website for the guest lists, panels and more.