You are here
Home > Hoopsology > Can Melo Handle Porzingis’ Popularity? 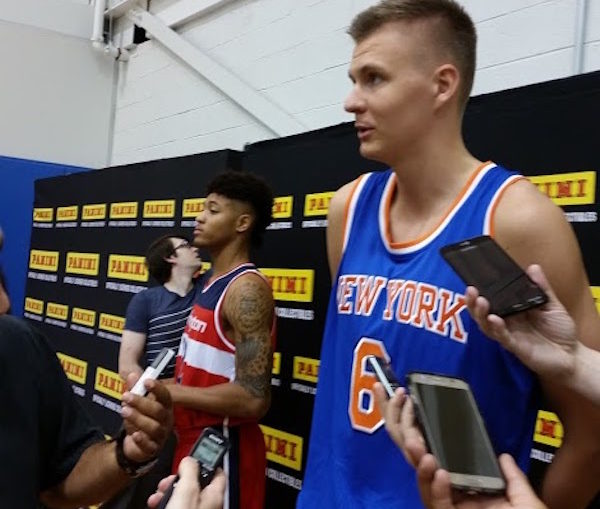 Leslie Monteiro has an interesting take on the impact of the Knicks rookie on the team.

It took 12 games for Kristaps Porzingis to finally have a portrait of him in the back page of Thursday’s New York Post.

It took 12 games for him to receive chants of “Porzingis” from the Madison Square Garden crowd.

It took five games for him to be a fan favorite.

It’s been a whirlwind start for the 20-year-old Knicks’ first round draft pick. Not even he thought he would get off to a great start in the NBA.

The Knicks’ success so far is predicated on Porzingis’  success.

While everyone has Porzingis fever, one can only wonder what Carmelo Anthony is feeling about his new teammate’s success. It’s hard to think Anthony is happy about his rookie teammate that is enjoying the fame.

This is the same player that did all he could to freeze out Jeremy Lin in the 2011-2012 season. He was insecure about Lin’s success while he was on the injured list, so he was going to do something about getting Lin out of town.

It’s hard to believe Anthony is happy with Porzingis. He did not like the pick when the Knicks made their draft selection. If he had his way, the Knicks rookie would have been traded to the Kings for that head case DeMarcus Cousins.

Anthony does not have time to wait for Porzingis to be a star. 12 games is not enough for him to change his thinking. Keep in mind, he hasn’t said much about the rookie.

When someone asked Anthony about Porzingis recently, he had a look of a person saying, “Whatever!” That should be inkling of Anthony not wanting to play with his teammate or him not giving credit with the rookie.

It shouldn’t be surprising about Anthony’s behavior. He hates sharing the spotlight with a teammate. He likes to be a guy that has the basketball at all times. He hasn’t set up passes to Porzingis so far.

He couldn’t be happy that Porzingis replaced him as a fan favorite.

Anthony seems insecure. He wants everything to be about him. He is not interested in sharing the spotlight with another alpha player. His history speaks for it.

The Knicks superstar will say the right things about Porzingis . He does not want to risk the wrath of Phil Jackson by diminishing the rookie’s performance.

With the Knicks winning so far, he will be disingenuous by toeing the company line about Porzingis’ greatness.

It will be interesting to know what’s going to happen when the Knicks have a rough patch this season. It’s bound to happen since the team has many flaws such as playing defense and shooting the basketball.

Anthony will not be a happy camper if he does not have the ball enough while Porzingis does his thing during the Knicks’ loss. He can play the trump card by citing how the teams stink with his teammate having the ball.

The chemistry with those two have to be better than it has showed or this could be another long season for anyone associated with the Knicks.

There’s so much to like about Porzingis . He plays with a maximum effort such as getting rebounds whether it’s offense and defense. He can create his own shot. He always seems to hit shots down the stretch.

His best attribute is working hard each and everyday at practice and to the game.

This is why Knicks fans have grown to favor him than Anthony.

Anthony is slowly becoming irrelevant when people talk about the Knicks these days . The Knicks fans want to talk about someone new. They want to hail a player that can give the franchise hope.

The Knicks fans are excited about their team’s start. The reason for that is Porzingis.

Who can blame Anthony for being insecure? When the Knicks traded for him few years ago, he thought he can bring fans hope. He salivated being cheered by the MSG crowd.

It was like that for awhile until Knicks fans figured out he is a problem.

He can’t be taking it well with the Knicks fans showing love for the rookie.

Everything is great for now.

Still, it might take one losing streak for the Knicks star to show frustration with the rookie.