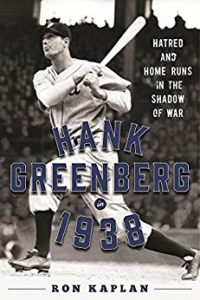 The seasons keep changing and the sports books keep coming. They are focused on all kinds of subjects, approaches, dealing with different sports. Herewith, for your reading, exciting tomes dealing with baseball, football, tennis.

Hank Greenberg in 1938 by Ron Kaplan (Sports Publishing, $24.95, 235 pages) is an important book for its subject, its time and its place. We are there with the powerfully built slugger of the Detroit Tigers as he plays baseball in the shadow of a world at war, a time Jews like him were being rounded up in Europe as the Holocaust began in all its horror.

“I came to feel that if I, as a Jew, hit a home run, I was hitting one against Hitler,” Greenberg said. Hank Greenberg in 1938 is a home run of a book. HIGHLY RECOMMENDED

Champions Way by Mike McIntire (Norton, $26.95, 256 pages) is as its sub-title proclaims about football, Florida and the lost soul of college sports. This book is as timely and relevant as today’s headlines as it cites chapter and verse behind the gore and scandal of institutionalized over-reach, fraud in the academy. The Rick Pitino bombshell that has just hit is the tip of the iceberg of all things wrong in collegiate athletics. McIntire nails it all!  MUST READ

Unstoppable by Martina Sharapova (Sarah Crichton Books, FSG, $28.00,  292 pages) will have much appeal for fans of tennis as the 30-year-oldgreat star reveals “my life so far.”

We are there with her as she travels as a six-year-old with her father to the United States dreaming of big things in the world of tennis. A coming-of-age and very personal narrative arc, is what makes the book a special read. Honest, insightful, dealing with tennis matches, personal ups and downs, what drives her, the book like its subject is a winner.   BELONGS ON YOUR BOOKSHELF

BIG LEAGUE DREAM by Roy Berger (Mountain Arbor Press, $16.95, 262 pages, paper) is a collection of stories from former big league baseball players. Those who have a role in the book include Bucky Dent, Chris Chambliss, Mudcat Grant, Ron Swoboda, Gary Bell, Maury Wills. There are lots of insights into their lives as they look back at what they accomplished.

About Harvey Frommer:  One of the most prolific and respected sports journalists and oral historians in the United States, author of the autobiographies of legends Nolan Ryan, Tony Dorsett, and Red Holzman, Dr. Harvey Frommer is an expert on the New York Yankees and has arguably written more books, articles and reviews on the New York Yankees than anyone.   In 2010, he was selected by the City of New York as an historical consultant for the re-imagined old Yankee Stadium site, Heritage Field.

“As a lifelong Yankees fan, I was devouring every last delicious new detail about my beloved Bronx Bombers in this fabulous new book.” —Ed Henry, , author of 42 Faith: The Rest of the Jackie Robinson Story