He was born in Cairo, Georgia on the last day of January in 1919, and died on October 24, 1972 in Stamford, Connecticut. Robinson attended UCLA, where he won letters in three sports.

He was in the Army during World War II and then played briefly in the Negro Leagues when the war ended. He was signed to a minor league contract with the Montreal Royals in 1946 by Branch Rickey, and the following year came up to the Brooklyn Dodgers and broke baseball’s age-old color line. 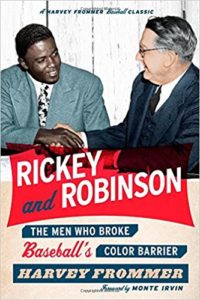 He played in the major leagues for a decade. He won the inaugural Rookie of the Year Award in 1947, the National League Most Valuable Player Award in 1949, and he helped the Dodgers win six pennants and one world championship.

Despite all the pressure he played under, he was still able to record a lifetime batting average of .311. His base-stealing ability and hustle won many games for the Dodgers. He set several records for fielding for second basemen.

His influence on sports is immeasurable. His breaking of baseball’s color line against the greatest of odds is still one of the most dramatic stories in all of sports history. And there are those who still have special memories of the man and the legend. Here is how one from that time still remembers the great player Brooklyn Dodger fans called “Robby”.

When school was out, I sometimes went with my father in his taxi. One summer morning, we were driving in East Flatbush in Brooklyn down Snyder Avenue. My father pointed to a dark red brick house with a high porch.

That was my first personal contact with Jackie Robinson. Years later I came across him in downtown Brooklyn in a Chock Full O Nuts coffee shop. He was the company’s vice president and director of personnel. Now he was heavier, gray-haired, slowed, sitting at the counter. We chatted a bit but the meeting was sadder, even poignant for me to see how this great athlete had been slowed by time and illness. He did not remember our chance meeting that long ago summer day but I did. Ironically, that coffee shop on Montague Street was close by what had been the offices of the Brooklyn Dodgers where Robinson had his first meeting with Branch Rickey who helped him shatter baseball’s color line.

Jack Roosevelt Robinson was my first real hero and one of the most important figures in the history of sports. Two of my favorite books I have written are about him.

One of the most prolific and respected sports journalists and oral historians in the United States, author of the autobiographies of legends Nolan Ryan,Tony Dorsett, and Red Holzman, Dr. Harvey Frommer is an expert on the New York Yankees and has arguably written more books, articles and reviews on the New York Yankees than anyone.

A professor for more than two decades in the MALS program at Dartmouth College, Frommer was dubbed “Dartmouth’s Mr. Baseball” by their alumni magazine. He’s also the founder of www.HarveyFrommerSports.com.   His ULTIMATE YANKEE BOOK can be instantly purchased from AMAZON: http://www.frommerbooks.com/ultimate-yankees.html or from the author.

Article is Copyright © 2018 by Harvey Frommer.  All rights reserved worldwide