Ryan O’Rourke is a 6-2, 181-pound defenseman who is going to hear his name called in the 2020 NHL Draft. Where this happens depends on a few different variables. The first is his strength and there’s no doubt he has a frame to build on so that’s not an issue. The second is his offensive abilities that didn’t show up on the stat sheet in his draft season.

His whole life he’s been a two-way defender. He was a forward when he was younger, but he grew up with that offense and scoring ability. But when he went back to defense, he had that offensive ability that translated too, and then he developed his defensive side of his game.

“He can play both roles,” said Cole Perfetti a top prospect in the upcoming draft). “He can put the puck in the net when he gets a good chance, he’s also making good headman passes and stretch plays. He’s a tough player to play against, especially in their zone.

“He’s a good defender and he makes you not want to go in the dirty areas. He’s mean and tough in the corners. He’s a great player. I was lucky to play with him in minor midget growing up and we still have a friendship.”

O’Rourke played very well in the 2020 CHL Top Prospects game when hockey was being played and a ton of scouts was in the rink.

“You just have to go with it. You’re not playing with a lot of these guys. We only had a few practices, so you have to weigh their tendencies pretty quickly. Everyone has the same skill level and skill set,” said O’Rourke. “I did pretty well. I think I finished some hits. I moved the puck out of the d-zone pretty well.”

O’Rourke plays for the Soo Greyhounds and he’s the kind of defenseman that most general managers are looking for.

“I refer to myself as that modern “old school” defenseman. I like to get the job done in the d-zone but can still contribute offensively.”

He blocks shots and does everything you’d want a defender to do and he’s still not 100% sure what his best attribute is in the d-zone.

“Toughness or grit,” he supposed. “Stop letting guys get by me or just be tough in the d-zone in general.” 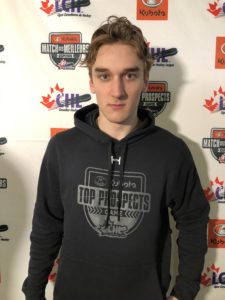 He takes that shutdown assignment. Not every defenseman is made to do that.

“I try and work on being more effective with my decision-making and wall skating. Exerting my energy as much as I can to make smart decisions,” O’Rourke added. “We try to focus on more stick on puck. Just trying to keep guys to the outside and that can kind of save your legs throughout a game.”

A lot of NHL teams love disrupting the offensive flow of the game. Sometimes you can hear all the sticks hitting other sticks like a weird symphony.

“It’s one less shot or one less chance for them,” O’Rourke reiterated.

He’s the captain of the Soo Greyhounds and he has a lot of value heading into the draft. Some team is going to get more offense than they bargained for in this shutdown rearguard. it will take a few years for that to happen but I expect that to happen.