Philadelphia – – The memory of Smokin’ Joe Frazier is alive and well thanks to Weatta Frazier Collins, the rest of the Frazier family and their foundation. On www.thelegacyexists.com  they have a mantra that I heard more than a few times on this night, “Within you there is a fighter”, “Never give Up” those who watched Joe fight understand this very well.

The mood was jovial, they had a silent auction, raffles, great food, and a terrific band, the Urban Guerilla Orchestra, UGO. And a fun host, Dwight Smith who made everybody feel very welcome at Penns Landing Caterers.

The people who ran this were all high-quality individuals. Young, old, they were all there to do something good, to remember Joe and to impact lives with the 9 educational scholarships that were given out.

A few boxing legends spoke. The first was Larry Hazzard Sr. The noted referee and current NJ Director of the State Athletic control board is a former 3-time golden gloves champion. He met Joe when he was getting into the sport.

“Joe was a fighter and a winner,” he stated. “In 1963 Joe competed in the New Jersey golden gloves. He moved to Philly for better training. He met a girl. He was an Olympic champion.

“Joe actually lost to Buster Mathis in a pre-Olympic bout. But Mathis got hurt in training and Joe, because he never gave up, ended up representing the United States of America.”

Larry Holmes spoke. The “Easton Assassin” captivated the audience by just being Larry.

“Joe is one of the greatest fighters of all-time,” he explained.

At one point Larry talked about himself even though his wife wasn’t going to be happy about that.

Hazzard and a few others got lovely wood carved busts of Joe. Larry got an amazing 3D photo of his career. There was a 3D display of Frazier’s career expertly crafted by photographer, Joseph H. Smith. 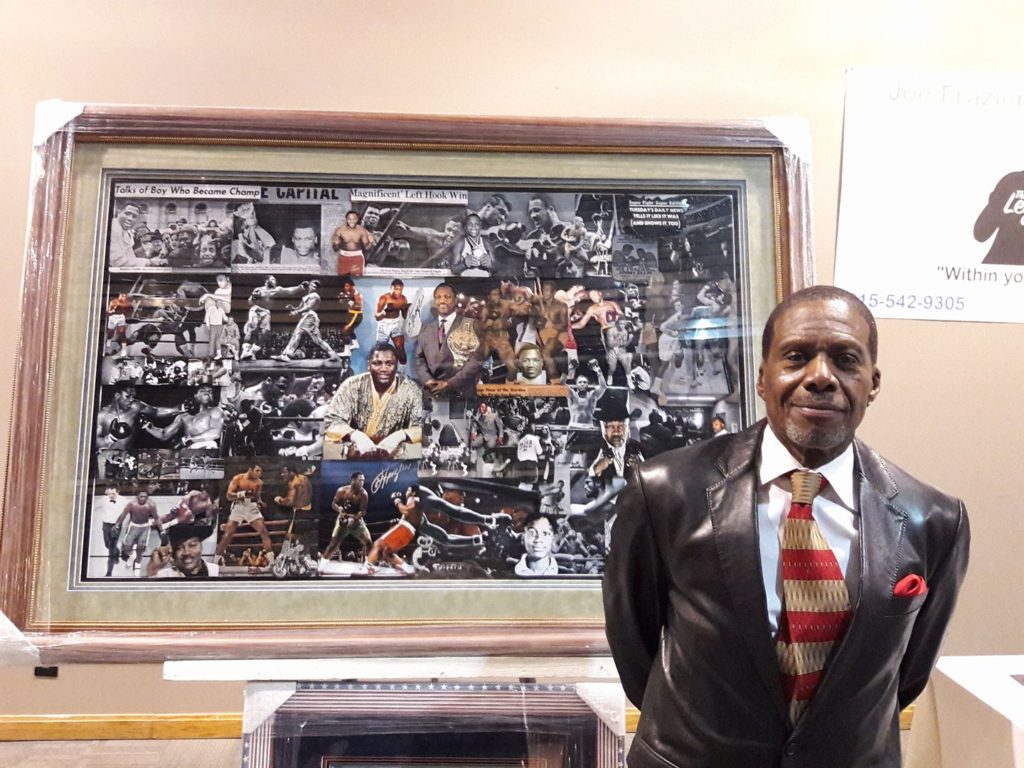 Singer, songwriter, Doreen Taylor was there showing off her video “Unstoppable”. She talked about her friendship with Joe as well. She showed off some expert emcee skills that could take her to Vegas someday if she ever decided to do that.

The rang the ring bell for folks who were no longer with us including another boxing legend, Lou Duva.

As the daughter of Joe, Weatta who is the founder/President is a very special person. She is the living embodiment of Joe. Having met Joe I can see him in his daughter. And Joe taught her some important life lessons.

Joe was trash talked in the ring by many of his opponents. He never engaged in that. There’s a reason why.

“His philosophy was you never look down on a man unless you’re going to help him up. You don’t degrade people. Being Christians he’d say you never know when g-d when he was coming back and who he’d come through, “she stated. “If it were a homeless man that could be g-d dressed up in disguise. We never did any trash talking. Words can be very hurtful. He thought that he was an underdog and low man on the totem pole.”

Next March 11th this will happen all over again. All are welcome. I’ll certainly be there. 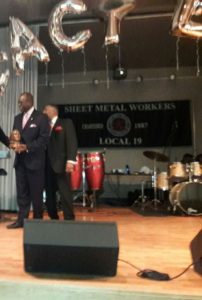